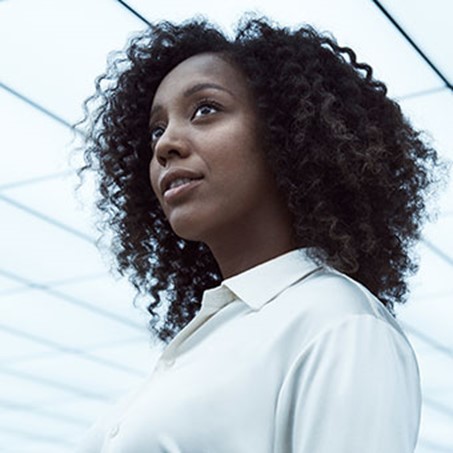 On Feb. 18, 2021, Dr. Cooper helped make history when the Mars Perseverance Rover successfully landed on the Red Planet. Part of the famed Jet Propulsion Laboratory team, Dr. Cooper inspires others with her love of STEAM (Science, Technology, Engineering, Arts and Mathematics), her personal journey and the obstacles she overcame, and her fascinating tales of what it’s like to be a real-life guardian of the galaxy. She also shares how important it is for people from diverse backgrounds to become the next generation of leaders in the fields of science and technology.

A reception will follow immediately after the lecture in the Golden Eagles Room.

Dr. Manny Scott (2020)
Dr. Scott is an original Freedom Writer, whose story is told in part in the hit movie, "Freedom Writers." Through The Power of One, How to REACH Youth Today, Becoming Interculturally Competent, and his unique Turn the Page schoolwide assemblies, Dr. Scott has helped thousands of schools and organizations raise student achievement, develop intercultural competence, and increase teacher efficacy in 49 states and on six continents.

Dr. Ernest Morrell  (2018)
Dr. Morrell is the Coyle Professor in Literacy Education and inaugural director of the Center for Literacy Education in the University of Notre Dame’s Institute for Educational Initiatives. He is the author of several books, including “Critical Media Pedagogy: Teaching for Achievement in City Schools."

Dr. Michael W. Apple  (2017)
Dr. Apple is the John Bascom Professor of Curriculum and Instruction and Educational Policy Studies at the University of Wisconsin, Madison. He has been selected as one of the 50 most important educational scholars in the 20th century.

Dr. Kevin Kumashiro (2015)
Dr. Kumashiro is the dean of the School of Education at the University of San Francisco. He is an award-winning author and editor of 10 books on education and social justice. Dr. Kumashiro discussed the topic of school reform and spoke with students after the lecture.

Dr. Angela Valenzuela (2014)
Dr. Valenzuela is professor of Educational Policy and Planning at the University of Texas at Austin. Her discussion focused on educational equity and the policy imperative. Dr. Valenzuela's research and teaching interests are in the sociology of education, minority youth in schools, educational policy, and urban education reform.

Mr. Oliver Stone and Dr. Peter Kuznick (2013)
Oliver Stone is a distinguished screenwriter, producer and director who has won four Academy Awards and three Golden Globe Awards for his extensive film work. Among his most well-known works are "Natural Born Killers", "Born on the Fourth of July", "JFK", "Wall Street", and "Platoon". He has also directed documentaries including "Comandante", "Persona Non Grata" and "Looking for Fidel".

Dr. Peter Kuznick is a professor of history at American University (AU) in Washington, DC, where he teaches courses on 20th century American history. He also directs the award-winning Nuclear Studies Institute at AU. As a noted historian, he writes and lectures frequently about politics and science, Cold War culture and nuclear history.

Dr. Freeman Hrabowski, III (2012)
Since 1992, Dr. Freeman A. Hrabowski, III has served as the president of the University of Maryland, Baltimore County. In 2009, Time magazine named him One of America's 10 Best College Presidents, and in 2010 he won the TIAA-CREF Theodore M. Hesburgh Award for Leadership Excellence and the Carnegie Corporation of New York's Academic Leadership Award. Dr. Hrabowski's research focuses on science and math education, with special emphasis on minority participation and performance.

In 2010, the Jean B. Carlson Memorial Lectureship was established by family and friends in what is now the Daniel L. Goodwin College of Education at Northeastern Illinois University. The fund was the first of its kind for Northeastern and continues to provide an annual lecture for the benefit of the Goodwin College and broader University Community on the subject of leadership development, adult learning and latest trends and innovative approaches in higher education.

Dr. Jean Burke Carlson (1922-2010) taught at Northeastern Illinois University in the Educational Foundations department for 18 years, serving as Chair of the Department from 1977 to her retirement in 1989. In 1991, she served as Acting Dean of the College of Education while conducting the search for the next Deanship.

Dr. Diane Berger Ehrlich (1943-2019) was a faculty member of NEIU in the Department of Educational Leadership and Development, formerly Educational Foundations, and eventually served as Department Chair. After 25 years of service, she retired in 2012 as Professor Emerita.

Drs. Carlson and Ehrlich served the College of Education and were not only colleagues but dear friends. When Diane passed away in March 2019, family and friends reached out to the University to discuss adding her name to the Carlson Memorial Lectureship. Given the professional contributions to the College of Education as well as the enduring friendship of these two women, it was agreed that this would be a fitting tribute for the two colleagues to be recognized and celebrated together. In April 2019, the Memorial Lectureship was renamed The Jean Burke Carlson and Diane Berger Ehrlich Memorial Lectureship.