It’s getting to be that time of year again! As the end of the semester rapidly approaches, Northeastern Illinois University is celebrating a slew of accomplishments by its students, faculty, staff and alumni. Read about the latest faculty book, a relief effort for earthquake victims and two separate alumni who are making news for their musical work with Chicago students.

Tony Pozdol didn’t exactly launch his college career as standout scholar. (You really need to read the story.) Now one year since earning his Bachelor of Arts in Secondary Education-English, Pozdol is teaching ninth-grade English with cutting-edge curriculum that he developed as a Northeastern student. In March, his work with Assistant Professor of Educational Inquiry and Curriculum Studies Alison Dover was published in English Journal. 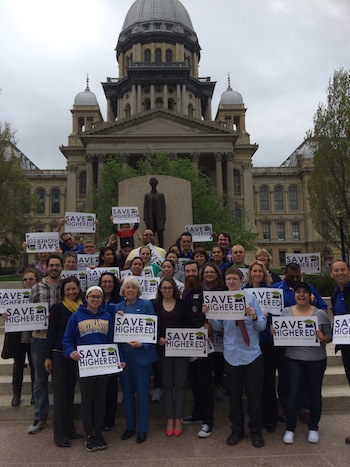 Northeastern faculty, staff, students and alumni joined hundreds of others from colleges and universities around the state in Springfield on April 20 to participate in a rally to urge our state government leaders to quickly find a funding solution for higher education. On April 22, SB2059 passed both chambers of the Illinois Legislature to provide stopgap funding for the public universities, community colleges and about 40 percent of the MAP funds.

History Librarian Edward Remus was one of five librarians from Illinois who visited Cuba in March in a first-ever study tour to bring Library and Information Science students from the United States to Cuba. They participated in a symposium hosted by the University of Havana, attended the 16th annual international Informática convention and fair and sustained an ongoing dialogue on the legacy of the Cuban Revolution in the present.

Going to the movies

Paul A. Schroeder Rodríguez, chair of the Department of World Languages and Cultures, has published his second book, “Latin American Cinema: A Comparative History.” The book, a 10-year labor of love, traces Latin America’s national cinemas through every major cinematic period in the region, from the silent period through the digital age.

In collaboration with the Consulate of Ecuador in Chicago, Northeastern is collecting donations as part of the earthquake relief effort. Donations will be accepted from 9 a.m.-6 p.m. in the Student Lounge through May 5. The Office of Student Leadership Development and the Student Government Association will serve as volunteers. The greatest need is for non-perishable food items, tents, sleeping bags and first aid kits and supplies.

A boost for civic leadership

Northeastern has been awarded a $1,400 McCormick Election Project Grant by Illinois Campus Contact to support the University’s efforts to engage its diverse student body in the electoral process and enhance civic learning and democratic engagement opportunities for its students. The funds will be applied toward internal outreach efforts and election programs designed to increase voter registration, voting rates, and understanding and awareness of the issues.

President Sharon Hahs has announced a number of employee awards for the academic year 2013-14. The Teaching Professional and Resource Professional Excellence Awards for achievements and contributions to the academic community went to:

The Instructor/Academic Support Professional/Academic Resource Professional Excellence Award for achievements and contributions to the academic community went to: 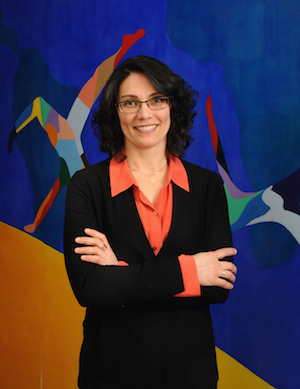 Starring in The Mash

Amina Chaudhri, assistant professor of Elementary Education, was the latest faculty member featured in Northeastern’s partnership with The Mash, the Chicago Tribune’s weekly publication for teens. Chaudhri answered questions about studying to become a teacher, best practices for time management and the one trait her best students have in common.

DNAinfo Chicago featured Tony Esposito (B.A. ’07 Music), who teaches music at Onahan Elementary School in Chicago. Esposito has led eight students in founding Raven Street, a rock band that includes a couple of Beatles songs in its repertoire. “Lot of enthusiasm surrounding this band lately," Esposito told DNAinfo Chicago. “And there are no shortage of talented kids at this grade school.”

The Northeastern Programming Board will present NestFest 2016, featuring Chicago artist Phenom, on April 22. Northeastern’s own Eagles Dance Crew will serve as the opening act. 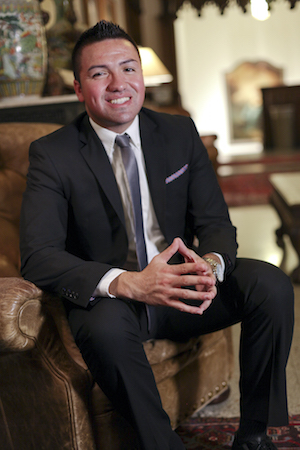 Young entrepreneur Jose Fulgencio (B.A. ’10 Political Science) will return to Northeastern to lead a workshop on how to build a business plan for your life. The event is part of the NEIU Alumni: All Access series. Fulgencio has founded several start-up companies, including Meso Bio, Oye! Help Me and LDMS Media.

The Polish and European Academic Center for Exchange and Research and the Department of World Languages and Cultures will host the Kosciuszko Foundation Lecture, “Wills as Tools of Power in the Late Medieval Urban Community of Krakow,” by KF fellow Jakub Wysmulek of the University of Warsaw and the Polish Academy of Sciences. The event, scheduled for 7 p.m. April 26 in LWH 4006, is free and open to the public.

Northeastern will celebrate its new Tree Campus USA designation at 3 p.m. April 28 in the University Commons. (Not coincidentally, April 28 also happens to be Arbor Day.) Activities will include tree planting, a tree scavenger hunt, learning about the various benefits of trees, and the hug-a-tree campaign. Share your hug-a-tree moments by posting tree-hugging photos to the NEIU Green Fee Facebook page with the hashtag #NEIUtreehug!

Take in some TRIO

Are you following TRIO Student Support Services on Facebook and Twitter? You should! Follow along to get information on TRIO workshops such as ACT/TAP prep in math and writing, as well as info on scholarships, financial planning, communication skills and job searches.