Noteworthy at Northeastern: Blue and gold ... and green

Northeastern Illinois University has always been proud of its commitment to environmental consciousness. Now the University has been recognized for its work with trees. Find out more on the Arbor Day Foundation honor, the winners from the Black Heritage Awards and how the University will participate in the upcoming elections.

Northeastern has been honored with 2015 Tree Campus USA recognition by the Arbor Day Foundation for its commitment to effective urban forest management. Tree Campus USA is a national program created in 2008 by the Arbor Day Foundation and to honor colleges and universities for effective campus forest management and for engaging staff and students in conservation goals.

Eleven members of the Northeastern community were honored during the 14th Annual Black Heritage Awards ceremony on Feb. 19 at the Jacob H. Carruthers Center for Inner City Studies. Find out who!

Wins for The Independent 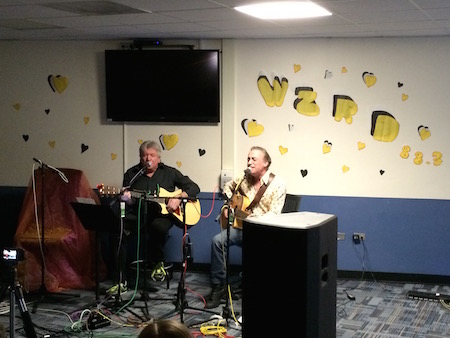 Student-run radio station WZRD (88.3 FM) hosted a special live interview Feb. 25 with Karl Green (pictured above on the left), the original bassist and backing vocalist of the legendary 1960s rock band Herman's Hermits. During the interview, Green talked about performing on “The Ed Sullivan Show” and touring with The Who. Green performed eight songs live on WZRD and in front of an audience in the Student Lounge, including the mega-hits “I’m Into Something Good,” “Mrs. Brown,” and “I’m Henry VIII, I Am.” The interview and performance were a special early version of WZRD's long-running performance show, Thursday Night Live. 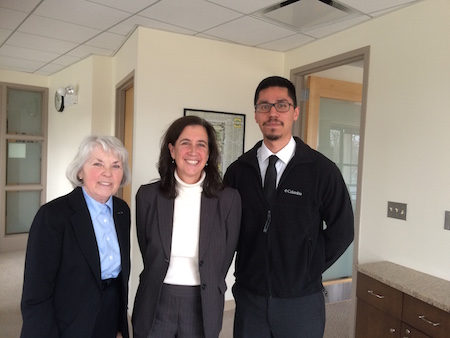 A visit from the Illinois Secretary of Education

Illinois Secretary of Education Beth Purvis visited Northeastern on Feb. 26 to learn about the University and for the administration to share its concerns and challenges with the ongoing budget impasse. The meeting was attended by President Sharon Hahs, Provost Richard J. Helldobler, Vice President for Finance and Administration Michael Pierick, University Planning and Budget Council Chair Jon Hageman, Student Trustee Pedro Nungaray and Executive Director of Government Relations Suleyma Perez. (Pictured above, from left: Hahs, Purvis and Nungaray)

Assistant Professor of History Mateo Farzaneh appeared on WBEZ’s “Worldview” to talk about Iran’s Feb. 26 parliamentary elections. Speaking about the country’s recent nuclear deal, Farzaneh said, “With the sanctions being lifted and with the opening of the dialogue, with the shaking of hands of the secretaries and the foreign ministers, Iranians are very, very hopeful and they want to see to it that this will continue and be something greater than it is now.”

The annual International Business Conference will focus on Europe and the European Union on March 7 and 8. Free and open to the public, the conference is organized and run by students from the College of Business and Management. Alumna and Global Chief Information Officer at Smithfield Foods Julia Anderson (B.S. Information Science) will present “Recipe for Success” on March 7. Pawel Pietrasienski, Minister Counselor in the Trade and Investment Section of the Polish Embassy in Washington, D.C., will deliver the keynote speech on March 8.

Get social with the IBC

The International Business Conference is March 7-8! Each year, the College of Business and Management's student-led event focuses on a different region of the world. Learn about the event's speakers and sessions on Facebook and Instagram.