Gil Garcia is retiring from Northeastern after the Fall 2019 semester after 23 years with the University. She was honored with professor emerita status at Commencement on Dec. 15, the same day her book was released.

As a non-academic text, this book is different from Gil Garcia’s previous releases. The book is full of narrative stories that she and a Canadian instructor, co-author Mercedes Cardella, experienced while they were teaching in Saudi Arabia in 2015.

“One of the things we don’t do in the book is make any judgments of the culture,” Gil Garcia said. “We are telling the facts, the stories as they happened, but we are not saying that because they happened they’re wrong or they were good. We were very careful about that. What we can see here as a normal thing may not be normal there, and vice versa.”

There are 65 stories in the book. Gil Garcia wrote 45, while Cardella authored the other 20. Many of Gil Garcia’s stories address the differences in the education system in Saudi Arabia compared with the United States. In the U.S., 12 credit hours would typically equal three to four classes. In Saudi Arabia, each class is only one credit hour, which left Gil Garcia teaching 12 classes a week.

“There were 35 students in each class,” Gil Garcia said. “I taught from 8 in the morning to 4 in the afternoon. On a normal day, I would teach 330 students.”

In her book, Gil Garcia recalls stories of the cheating, bribery and extortion she witnessed in the educational system.

“The best story that I have is that students plagiarized one of my works,” Gil Garcia said. “They paid someone on the internet to get the paper. They didn’t even open the paper. They may have changed the cover page. I took the paper and read it in my home and said, ‘Wait a minute. I think I know this paper.’ When I went to the second page I said, ‘This is my paper!’”

When she took it to the chair of her department, the chair laughed and said the students were too young to understand that what they’d done was wrong, even though they were sophomores.

“At another institution, these two kids would have been expelled immediately,” Gil Garcia said. “They got a talking to, but that’s the way they deal with that. That’s when I realized it wasn’t about the students, it was a problem with the university system.”

Gil Garcia taught leadership at the female campus of a university, so the stories told in the book are female-oriented. One story is called “I Forgot My Mascara,” in which Gil Garcia recalls that a student came in 45 minutes late to a 60-minute class because she forgot to put on her makeup.

“I’m thinking with my Latina mind, ‘mascara or a mask?’” said Gil Garcia, who is originally from Venezuela. “So I said, ‘Do you celebrate Halloween here? Do you have some sort of custom?’ She said, ‘No, Dr. Ana, my mascara. Today is Thursday. Today is the day we see the faces of the boys and the boys see us.”

Gil Garcia notes that through the use of cellphones, the male and female students are able to see each other even though they are on separate campuses. Although in Saudi Arabian culture parents elect the marriage partner for their daughters, technology—such as the use of cellphones—is pushing for that aspect of the culture to change.

This led to why Gil Garcia asked Cardella to co-author the book. Cardella did something in Saudi Arabia that Gil Garcia did not—she went on dates.

“Once Mercedes went out with a man and he took her to his home because he was serious about marrying her,” Gil Garcia said. “She went to his home for dinner and when she arrived there was another woman sitting at the table. The man introduced her as his wife. Mercedes was confused. He told her, ‘My wife knows about my love for you.’ It’s part of the culture.”

Gil Garcia shared that people go to Saudi Arabia for a specific reason such as work or education, not for leisure travel. As such, the book serves as a resource for those who want to understand what to expect and makes recommendations for outsiders to assimilate. With that in mind, Gil Garcia also is proud of the changes she was able to institute during her year at the university, namely pushing for more female representation on high-level university committees.

“As the only female professor with the highest ranking on the female campus, I was directly placed on committees by the university’s president,” Gil Garcia said. “At my two first meetings, I noticed that no one would listen to me. My opinions were ignored.  However, at my third meeting, they needed me to vote on an issue of faculty promotion. The university was going through the process of accreditation and they needed my vote to be ‘yes.’  Surprisingly to all of them, I voted ‘no.’ Their faces changed. The demanded an explanation which I provided. At that moment, they all realized that I had the right to my opinion. From then on, they accepted my voice at the table.”

Gil Garcia hopes that in the future women in Saudi Arabia can have more freedoms. She’s already seen recent changes, such as women being allowed to drive cars, which they were not allowed to do while she was there.

“Women, behind those veils, have some sort of empowerment,” Gil Garcia said. “When they are uncovered you see a very different female. You see the energy they have, the impetuousness they have, you see a woman who wants to be somebody someday.” 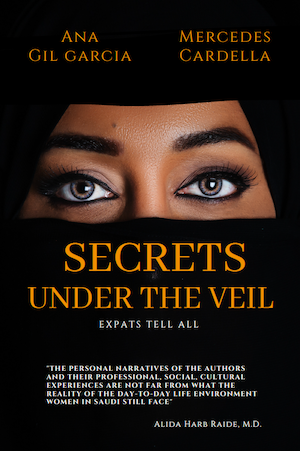