Noteworthy at Northeastern: A home for trees

Northeastern Illinois University has once again earned the Tree Campus USA designation. Read more about the leaf-friendly announcement, plus news on the passing of the founder of Ensemble Español, the latest Black Ensemble Theater performances at the Carruthers Center and more in this week’s Noteworthy at Northeastern.

For the fourth consecutive year, Northeastern has received a Tree Campus USA recognition from the Arbor Day Foundation for promoting healthy trees and engaging the University community in conservation efforts. In order to earn this distinction, the University had to meet the five core standards for effective campus forest management according to Tree Campus USA: a tree advisory committee, a campus tree care plan, dedicated annual expenditures for a campus tree program, an Arbor Day observance, and a student service-learning project. 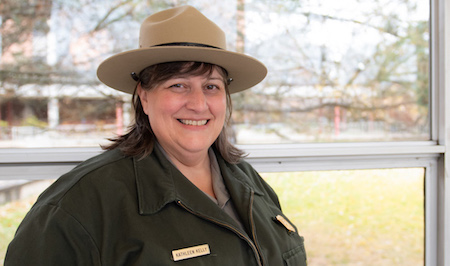 If a journey of a thousand miles begins with a single step, the first step of Kathleen Kelly’s journey of 56,932 miles took place at Northeastern. “I had a little hole in my schedule, so I took a class called Environment and Behavior,” said Kelly, who grew up on Chicago’s North Side. “I realized, ‘Oh, you can study the environment and you don’t have to be a biologist or a chemist or a geologist.’ You can study the environment through the lens of social science.” Kelly is now a National Park Service ranger and volunteer program manager for the Alaska Region and Denali National Park and Preserve. Among her many duties, she helps place volunteers throughout the Alaska region at national parks to help with conservation efforts.

Ensemble Español Spanish Dance Theater and Chicago’s dance community family is mourning the passing of founder Dame Libby Komaiko, who died Feb. 2. For more than 50 years, Dame Libby Komaiko’s extraordinary career embodied art, education, and cultural integrity. Her passionate advocacy of culturally specific art was well known, and her devotion to higher education recognized by artists and educators throughout Chicago. She was a professor emerita at Northeastern, and was presented with the Distinguished Alumnus Award in 2015. Tributes to Komaiko have been published by the Chicago Tribune, the Sun-Times, Hoy, Dance Magazine and the Lawndale News (in English and Spanish).

Voyage Chicago interviewed Art Professor Shencheng Xu about his personal history, his work and his philosophies on art. “As an artist and educator, I believe an artist has much more responsibilities for the society than at any time in human history,” Xu said. “Because of the fast developed social media and internet, the artist’s participation becomes more extensive and dynamic.”

Northeastern played host to a Jan. 24 event in which the Center for College Access and Success brought high school sophomores and juniors from Chicago Public Schools GEAR UP programs to the P.E. Complex to learn how to program robo-cars to navigate a city of the future. The event, coordinated by the Texas Instruments STEM Squad was covered by NBC Chicago for its “Making a Difference” series.

‘In the Shadow of Justice’

Northeastern’s partnership with the Black Ensemble Theater continues with performances of “In the Shadow of Justice” on Feb. 8 and 9 at the Carruthers Center. The intense drama depicts how two young, black police detectives—one woman and one man—are forced to face corruption, brutality and murder in a South Side Chicago police precinct where they have been assigned. Tickets are free for all students, regardless of which school they attend. Tickets are also free for Northeastern employees and alumni by calling the Welcome Desk or picking up tickets at the box office the night of the show.

Brasil Guitar Duo, a 2006 winner of the Concert Artists Guild International Competition, will perform in the Recital Hall on Feb. 15 as part of the Jewel Box Series. Hailed by Classical Guitar magazine for its “maturity of musicianship and technical virtuosity,” Brasil Guitar Duo is equally at home on a classical or a world-music series. Its innovative programming features a seamless blend of traditional and Brazilian works

The College of Arts and Sciences 50th Anniversary Lecture Series presents Dr. Walt Wolfram, who will offer a free screening of his latest documentary, "Talking Black in America," at 7 p.m. Feb. 13 in Alumni Hall North. Wolfram also will speak on "The Linguistic Significance of Dr. Martin Luther King Jr.: Implications for Sociolinguistic Justice" at 6:30 p.m. Feb. 14 the Golden Eagles Room.

Follow the Angelina Pedroso Center for Diversity and Intercultural Affairs on Facebook and Instagram for programming and initiatives in a welcoming environment designed to educate, empower and retain students from socially and culturally diverse backgrounds.