For more than 50 years, Dame Libby Komaiko’s extraordinary career embodied art, education and cultural integrity. Her passionate advocacy of culturally specific art was well known, and her devotion to higher education recognized by artists and educators throughout Chicago.

Born in Chicago June 30, 1949, and raised in Evanston, Ill., Komaiko started her dance training as a young girl, studying with Elisa Stigler at the Chicago Musical College of Roosevelt University. As a teen, she studied and performed jazz, modern and musical theater with the famed Gus Giordano. By age 18, she auditioned for the legendary Jose Greco, and was given the opportunity to train and perform with his world-famous Spanish Dance Company. Her journey into Spanish dance led her to the company of Lola Montes, and she studied with Maria Alba, Nana Lorca, Edo, Manolo Vargas and many others. She partnered with the late Roberto Lorca for many years.

In 1975, she founded the Ensemble Español—and what began as a company of seven student dancers is now a full company of 40 dancers, musicians and singers. She choreographed and produced the majority of the company’s choreographies, which now number near 135 original works.

In 1983, she was awarded the “Lazo de Dama de Isabel la Católica” by the Spanish Royal Court and government. This honor was bestowed for her superlative work in spreading the cultural and artistic values of Spain throughout the United States. She was the first American choreographer to receive this honor.

Komaiko was the recipient of many awards and civic honors, including the coveted Ruth Page Award (2003), the International Latino Cultural Center Lifetime Achievement Award (2004), and most recently, she received the first Legacy Award from Audience Architects for her commitment to the arts community. She was a professor emerita at Northeastern Illinois University, and was given the Distinguished Alumni Award by the school in 2015.

“We were saddened to learn of the passing of Dame Libby Komaiko, founder of the internationally acclaimed Ensemble Español Spanish Dance Theater, located here at Northeastern, and we extend our heartfelt condolences to Ensemble Español and the family, friends and loved ones of Dame Libby. As we mourn her loss, we are also grateful for her dedication and commitment to the University and the arts. She will be dearly missed,” said Gloria J. Gibson, President, Northeastern Illinois University.

“In 1978, I went to see this performance at NEIU I knew nothing about. It provided me my first glimpse of Dame Libby and Ensemble Español and it was then I knew what I wanted to do. Dame Libby believed in me from the very start and I now serve as Artistic Director all because of her. Her passion for Spanish dance was only exceeded by her passion for excellence, education and community. We dedicate ourselves to those same passions as we carry on her legacy,” said Irma Suarez Ruiz, Artistic Director, Ensemble Español Spanish Dance Theater.

“Dame Libby’s passion for Spanish dance was inspirational to all who met her. It was she who introduced me to Spanish dance more than three decades ago. While her physical presence is gone, her spirit will continue to resonate in the company and everyone… dancers, musicians, choreographers, students, youth and audience members …whose lives she touched. Gracias mi Libby de todo corazón,” said Jorge Perez, Executive/Associate Artistic Director, Ensemble Español Spanish Dance Theater.

“They say that every dancer dies twice: once when they stop dancing and once when they leave this world. While Dame Libby has left this world her passion and spirit will remain with us with every strike of a flamenco heel and every time the Ensemble takes the stage. I encourage everyone to consider a gift in her memory to keep the important work of the company and her legacy going strong,” said Richard J. Helldobler, former Provost and former Interim NEIU President.

In lieu of flowers Dame Libby and the family‘s wishes are for donations to be made to the Ensemble Español Spanish Dance Theater. 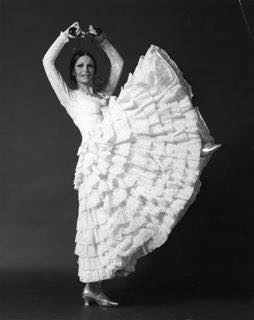