Commencement is just a few days away, and we head into the festivities with a surge of good news. This week’s edition of Noteworthy at Northeastern includes the latest book published by a faculty member, a big new grant and more. And if you can’t attend Commencement on Monday, be sure to tune in to the live stream at neiu.edu!

Northeastern has awarded emeritus status to two retiring faculty members—Dean of Libraries Carlos Melian and Associate Professor of Communication, Media and Theatre Nanette Potee—who will be honored during Commencement on May 8. Northeastern awards the prestigious status to eligible retiring faculty members upon the recommendation of the department or program, with the concurrence of the dean and the provost, and with the approval of the University president. 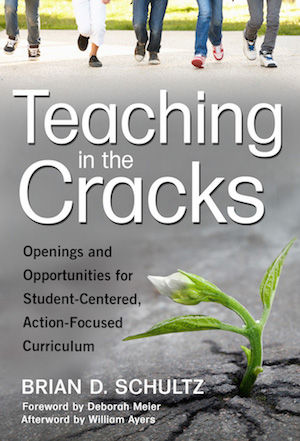 Professor Brian Schultz, chair of the Department of Educational Inquiry and Curriculum Studies, has published “Teaching in the Cracks,” his seventh book and second as author. The book was published by Teachers College Press. “Teaching in the Cracks” demonstrates how teachers and schools are creating emergent, democratic, progressive education amid the current context of high-stakes accountability.

A grant to support future teachers

The National Science Foundation has awarded Northeastern a five-year, $1.45 million grant through the Robert Noyce Teacher Scholarship Program to support students who are interested in becoming mathematics or biology high school teachers. The grant, which is in partnership with Wilbur Wright College, Harry S Truman College (both parts of the City Colleges of Chicago) and Chicago Public Schools, funds the Noyce Mathematics and Biology Scholars Program for students in their final two years at Northeastern. Students who become Noyce Scholars will receive $17,000 a year for up to two years. Students who are interested in participating should contact Laura West of the Student Center for Science Engagement (l-west2@neiu.edu or (773) 442-5664) by May 19. 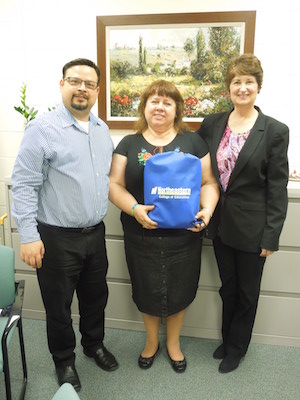 Northeastern hosted Maryna Babenko, a Fulbright Visiting Scholar from Ukraine, for four days in April. Babenko (pictured above in center), a Germanic language specialist, is an associate professor at H. Skovoroda National Pedagogical University in Kharkiv, Ukraine, and is currently conducting research at Virginia Commonwealth University. During her visit to Northeastern, Babenko delivered three lectures—one for undergraduates and two in graduate courses—related to cultural and historical overlaps between the United States and Ukraine.

Recognized by The New York Times

Interdisciplinary Studies student Michael Fischer was recognized by the New York Times in its recent Modern Love College Essay Contest. Fischer, who was honored among the “other notable essays,” wrote about his current relationship and the challenges he has faced in dating as an ex-con.

Northeastern students Stacy Alikakos (pictured above) and Patricia Burchfield were featured speakers during the Teach Out rally in Springfield on April 27 to advocate for higher education funding. About 250 people—including students, faculty and staff from Northeastern—participated in the event.

The Math, Science and Technology for Quality Education Program will host a student poster presentation from 4:30-6 p.m. on May 5 in the Cafeteria. The presentation is the culmination of the students’ semesterlong service projects that were based on topics covered in their math and science courses. The courses involved include Geometry and Physics, Algebra and Biology, Chemistry and Number Theory, and Discrete Mathematics.

We got the hashtag trending in Chicago for the Commencement ceremony in December. Let’s do it again! Before you post it, tweet it or share it—tag it! Tag your Commencement pics and congratulatory messages with #NEIUgrad for a chance to be seen on the big screen at Commencement!