Northeastern Illinois University’s Master of Social Work program has earned initial accreditation! Learn more about what this means for current, past and future students, meet program director Troy Harden, and much more as we head into spring break with this week’s edition of Noteworthy at Northeastern.

Accreditation for the M.S.W.

Troy Harden (pictured above) came to Northeastern three years ago to help launch the Master’s in Social Work program, which graduated its first class of students in May 2018. While that was a satisfying moment of accomplishment for Harden, his commitment to improving Chicago’s underserved neighborhoods goes far beyond the classroom. In addition to his work at Northeastern, Harden works with several community-based organizations that seek to reduce violence in Chicago’s at-risk communities. “Social work in our program asks us to work with the most vulnerable in our society,” Harden said. “I think we’re all connected. As much as Chicago has a history of segregation, the truth of the matter is the things that impact someone on the South Side impact someone up north and vice versa.”

Northeastern hosted the Chicago Cancer Health Equity Collaborative’s (ChicagoCHEC) fourth annual program steering committee meeting on March 11-12. The event featured several professors and experts in health disparities and cancer research from other universities across the country, as well as program officers from the National Cancer Institute (NCI). These experts will provide an in-depth evaluation of ChicagoCHEC’s programs and provide recommendations for continued federal funding. The visit featured a networking luncheon for early-stage and young professors, and a networking breakfast in the Pedroso Center for student trainees and CHEC fellows. NCI also sponsored two training sessions for students and young professors to inform them about grant funding and other resources available to them from the NCI. Lastly, ChicagoCHEC sponsored a meeting with Dr. Karen Hubbard from the City College of New York to inform faculty and leadership about institutional transformation from a primarily teaching institution to a university that is supportive of grant-based, faculty research.

Forward, an online publication that covers American Jewish people, featured Acting Chair of the Department of Communication, Media and Theatre Edie Rubinowitz for her work on the “DACAmentation: Humanizing Our Stories” project. “Stories of Jewish immigration are about lifting ourselves up,” Rubinowitz told Forward. “We come from persecution—and it’s a little different (with Latino immigrants), some of them come from economic displacement or extreme poverty—but the needing to leave, wanting to make a better life for their children, that piece is universal.”

The Pioneer Press reported on Ridgewood High School District 234’s work with its students on career pathways. “We’ve been fortunate enough that Northeastern Illinois University has worked with us to create a pipeline and to allow students to earn dual credit at Northeastern for the entry-level teaching courses,” Superintendent Jennifer Kelsall told the newspaper. “We’ve got some students doing some work right now in the classes.”

Chloe Feoranzo will perform March 15 as part of the Jewel Box Series. Feoranzo is a 26-year-old clarinet and saxophonist who has been performing professionally since the age of 15. She just completed a three-year tour with Pokey LaFarge. The band toured many countries and appeared on various shows such as “The Late Show with David Letterman,” “Prairie Home Companion” and the “Grand Ole Opry.”

Northeastern’s partnership with the Black Ensemble Theater continues with performances of “The Plea” on March 15 and 16 in Stage Center Theatre. “The Plea” addresses the violence epidemic that has engulfed many Chicago communities, and the hopelessness and mental anguish that has consumed the neighborhoods. Tickets are free for all students, regardless of which school they attend. Tickets are also free for Northeastern employees and alumni by calling the Welcome Desk or picking up tickets at the box office the night of the show. 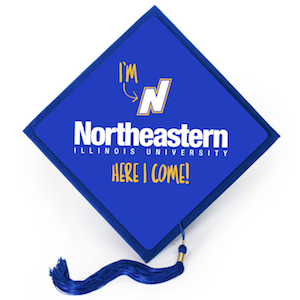 This is a place for current, future and former students. Follow along to get wallpaper options for your phone and to see snaps from all of Northeastern’s locations!