Northeastern Illinois University students, faculty and alumni continue to earn awards for their work. Read about the latest winners, this weekend’s Chicago Brass Festival and more in this week’s edition of Noteworthy at Northeastern.

Northeastern faculty, students and alumni featured prominently in the annual Illinois TESOL Bilingual Education (ITBE) Convention that took place Feb. 22-23 in Lisle. ITBE is the largest TESOL conference in the Midwest. Among those presenting papers were faculty members Rachel Adeodu, Courtney Francis, Jeanine Ntihirageza, Ulugbek Nurmuchamedov and Gina Wells; students Jeanine Caughlin, Annie Gill-Bloyer and August Garnsey; and alumni Gevik Anbarchian, Leah Kang and Michael Ziadat. Associate Professor William Stone was once again a featured speaker with a talk titled “Lies, Damn Lies and English Verbs.” He also led the discussion on vocabulary at the higher education special interest group. Three of the five awards presented during the convention went to Northeastern individuals (pictured above): Ayesha Riaz was one of the two winners of a $500 undergraduate scholarship; Jacqueline Rasmussen was one of the two winners of a $1,000 graduate scholarship; and Stone was the winner of the Elliot Judd Outstanding Teacher Award.

Four individuals with connections to Northeastern have won awards in the Illinois Woman’s Press Association’s (IWPA) annual Mate E. Palmer Professional Communications Contest. The winners move on to the National Federation of Press Women competition. This year’s Northeastern winners, who will be celebrated at the 78th Mate E. Palmer Communications Contest Awards Luncheon in May, were:

Seraph Brass will perform in the Auditorium at 7:30 p.m. March 8 as part of the Chicago Brass Festival. Tickets are free for students at the Welcome Desk and $10-25 for the general public. Seraph Brass is a dynamic brass ensemble drawing from a roster of America’s top female brass players. Performing primarily as a brass quintet or sextet, Seraph also performs as a larger ensemble of 10 performers. Committed to engaging audiences with captivating programming, Seraph Brass presents a diverse body of repertoire that includes original transcriptions, newly commissioned works and well-known classics. Seraph released their debut studio album, “Asteria,” on Summit Records in January 2018, winning a Silver Medal Global Music Award.

Chloe Feoranzo will perform March 15 as part of the Jewel Box Series. Feoranzo is a 26-year-old clarinet and saxophonist who has been performing professionally since the age of 15. She just completed a three-year tour with Pokey LaFarge. The band toured many countries and appeared on various shows such as “The Late Show with David Letterman,” “Prairie Home Companion” and the “Grand Ole Opry.”

Northeastern’s partnership with the Black Ensemble Theater continues with performances of “The Plea” on March 14, 15 and 16 in Stage Center Theatre. “The Plea” addresses the violence epidemic that has engulfed many Chicago communities, and the hopelessness and mental anguish that has consumed the neighborhoods. Tickets are free for all students, regardless of which school they attend. Tickets are also free for Northeastern employees and alumni by calling the Welcome Desk or picking up tickets at the box office the night of the show.

Southern Illinois University Edwardsville Associate Professor Saba Fatima will be this year’s speaker for the annual Inspiring TriVia: The Sarah L. Hoagland Speaker Series event. She will speak on “#MeToo in Muslim America” at 3:05 p.m. March 14, in LWH 1002. Fatima works on a variety of issues in epistemology, political philosophy and applied ethics, as well as philosophy of gender, race and religion. Free and open to the public, this talk examines the significance of an intersectional lens in establishing the unique and specific challenges that Muslim American women face as part of the #MeToo movement. 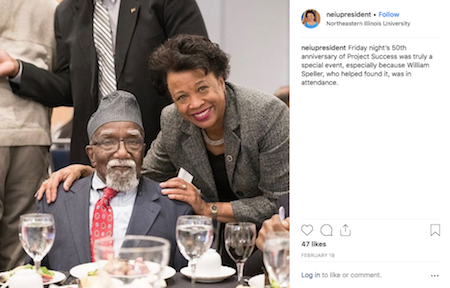