As the national conversation continues over the deaths of Michael Brown and Eric Garner, 10 students at Northeastern Illinois University have a special perspective on the hot-button issue of police brutality.

In November, they traveled to Geneva, Switzerland, to attend the United Nations Committee Against Torture’s periodic review of the United States. The session concentrated on several issues, including police behavior.

Just a week before a grand jury chose not to indict a Ferguson, Mo., officer in the shooting death of Brown, touching off protests nationwide, his family was in Geneva to testify in a closed session.

Far from watching the event unfold on TV, Northeastern’s students were walking through the halls of the UN headquarters and through the international city filled with activists, U.S. representatives, relief organizations and UN dignitaries.

“This experience relates directly to what’s happening in the classroom,” Justice Studies Department Chair Cris Toffolo said. “The students are so curious, so hungry to learn. Many of them are eager to go back.”

They may get their chance in April, when the U.S. faces a General Periodic Review on its overall human rights record over the past four years. Northeastern’s students were joined on the trip by Toffolo and Justice Studies instructor Pat Hill. It was sponsored by Northeastern’s Office of International Programs.

“You get to meet people from all over the world,” Hill said. “The exposure for the students and the exposure to the issues in a world center is important.”

The trip to Switzerland was short but busy. On Nov. 18, the students joined an International Committee of the Red Cross briefing.

“Our students were the ones asking all the great questions,” Hill said. “The students made Northeastern shine.”

Over the following two days, they attended hearings and watched the U.S. government’s testimony at the UN headquarters, and they were interviewed for a video documentary about that event by Webster University’s Geneva Campus.

“It’s important for our students to go to a center of power,” Toffolo said. “It’s very impactful to rub shoulders with the international community.” 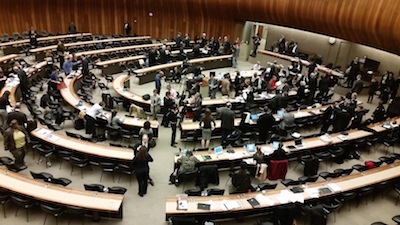