Of the 14 Student Research Achievement Awards handed out, Rebiai (B.S. ’16 Chemistry) was the only student to represent the area of nanoscale biophysics. Her research represents the first structural characterization of light-regulated enzyme using atomic force microscopy. Members of the protein family, known as photoreceptors with homologs in fungi and plants, play a major role in signal transduction pathways that regulate cellular growth and development.

“Rima Rebiai is an outstanding student. She was a distinguished NIH-MARC scholar during her time at Northeastern and she won several undergraduate research awards, including at the Society for Advancement for Chicanos and Native Americans and the Annual Biomedical Research Conference for Minority Students,” Stojkovic said. “This is a true honor to have our student stand on the national stage, highlighting the importance of the research we conduct at Northeastern and the collaborative efforts that exist among faculty in mentoring students in research endeavors and writing successful grants to federal agencies such as NSF and NIH.”

Rebiai is now in her first year of Ph.D. studies at the University of Illinois-Chicago. 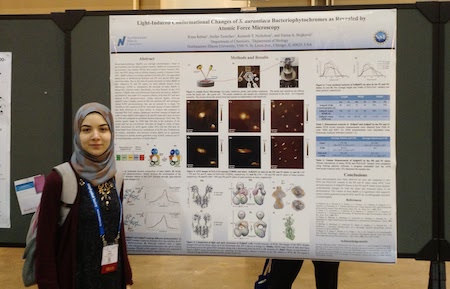 Above photo: Rebiai presents her research during the Biophysical Society 61st Meeting in New Orleans.