Northeastern rolls out the red carpet for cinema

If you visit Northeastern Illinois University on almost any Wednesday evening, you’ll find a happy group of film buffs settled into the cozy seats of the Auditorium for a rare movie screening. The journey to get them there was anything but comfortable.

For more than 40 years, a group known as the Classic Film Series screened 16mm and 35mm rare and classic films in an unusual cinema: the second-floor auditorium of the Bank of America building on Irving Park Road in Chicago’s Portage Park neighborhood. In spite of its unlikely location, the series built up a loyal audience even during several bank mergers and other transitions. It was the only cinema of its kind on the Northwest Side.

When the bank branch finally closed in 2010, three organizers of the cinema group formed the Northwest Chicago Film Society, now known as the Chicago Film Society (CFS), as a non-profit organization. In 2011, they resumed the screenings at other Chicago theaters, including the Portage Theater and the Gene Siskel Film Center before landing at the ornate but aged Patio Theater, a movie palace nearly a century old that lacked heating and air conditioning and had uncomfortable seats.

But the CFS wanted a better venue for its diehard flock of film fans; they just couldn’t justify asking patrons to sweat and shiver during the showings. They needed a new home.

“The partnership between Chicago Film Society and Northeastern came about in the best possible way,” CFS programmer Kyle Westphal said. “Kiyan Warner was a Northeastern student who also worked at the Music Box Theatre. He was aware of our plight and recognized a complementary gap in Northeastern’s programming. He reached out to us and suggested that Northeastern could be a good fit.”

Warner was right. The CFS connected with Northeastern’s Department of Communication, Media and Theatre (CMT) and partnership discussions began.

“The Auditorium in Building E had great sightlines and comfortable seats; it even had a projection booth, but no projector,” Westphal said. “We supplied the projectors, since we have a sizable collection of projectors and projector parts. Northeastern purchased a screen and we started putting together our first program.”

Indeed, besides Northeastern’s convenient location, the University’s 425-seat Auditorium proved to be a perfect match with an existing booth that could accommodate the 35mm projectors that are required to screen the CFS’s collection of films.

Since the partnership was formed in the summer of 2015, the CFS has screened more than 60 films at Northeastern. From its first selection, the obscure golf-themed Technicolor musical “Follow Thru” from 1930, the CFS has sold more than 6,000 tickets, growing its audience to include Northeastern students, faculty, staff and alumni as well as its core attendees.

“We explored what was possible at one of our department meetings,” Assistant Professor of Communication, Media and Theatre and Director of Graduate Studies Shayne Pepper said. “The key need for the film society was a stable home. Local theaters were able to accommodate the series for short runs, but the idea of a permanent place to be in residence was appealing.”

The Chicago Film Society has a reputation for programming an eclectic mix of films each season, and each feature also includes a short film or cartoon as well as trailers or old advertisements. Many of the films are not available on home video, so 35mm prints are the only way to see them.

“Quite a few of these are classic films by respected directors. Some are lesser-known gems that are interesting in their own right,” Pepper said. Such films include William C. deMille’s “The Bedroom Window,” a silent who-done-it that was screened at Northeastern with live organ accompaniment, Fleischer Studios’ animated “Gulliver’s Travels,” and the Pre-Code “Okay, America!” that was produced in 1932 before censorship guidelines were more systematically enforced in Hollywood.

“Important to the mission is the film artifact itself,” Pepper said. “Sometimes we get archival prints; sometimes we get newly restored prints.” Prints come from film studios, museums, archives and private collections. Several of the screenings have been prints from the Library of Congress, the Museum of Modern Art, the UCLA Film and Television Archive and others that work to preserve cinema history.

Beyond establishing a home for the series, there are additional benefits to both partners—including Northeastern’s students.

“We saw that the partnership would provide increased publicity for both parties and engagement with the local community, as the Albany Park/North Park area did not have a public venue for film screenings,” Pepper said. “For Northeastern, we recognized that there would be a clear benefit to our students who would have access to 35mm exhibition of important and classic works of cinema. We saw the potential of incorporating these screenings into our film studies curriculum, and we have done so with great success.”

Such integration includes assigning students to attend a CFS screening for an Introduction to Cinema or American Cinema class. It also manifests as bonus points for students who attend a screening and write a review of the film for a Writing Intensive Program or Fundamentals of Media Writing class.

“These are all great ways to integrate the films, but we also wanted to establish a class that is centered around the film society screenings,” Pepper said.

CMTM 390: NEIU Cinémathèque was developed and was first offered in Spring 2017. The course not only fosters the discussion and research of films, but it also helps students meet their academic needs.

“Most universities have a cinémathèque class where students attend films and discuss them to earn a single credit hour,” Pepper said. “We’ve followed this model at a time when our students have a need to hit 40 credit hours at the 300-level. Since 40 credits aren’t easily divisible by three, many students are left needing a single credit. That’s where the Cinémathèque class can come in.”

In addition to attending five required screenings and writing response papers about them, the Cinémathèque students also complete online activities that explore topics related to the material practices of viewing, archiving, preserving and studying film.

One of those students developed his love for film while growing up in an apartment above a photography studio.

“My mother worked for the photographer mounting pictures in wedding albums. My father would shoot weddings on the side when the photographer's schedule was too full,” CMT major Jason Merel said. “There was an attached film lab, so I would also get to go in the darkroom and see film develop. To a kid, that's as close to real ‘magic’ as you get. So I learned to appreciate film and its unique qualities from an early age.”

Not everyone has the opportunity to get that experience.

“It's really cool that we have a film society in residence at Northeastern. In a time when our media consumption is pushing more and more to digital, it's important to understand and appreciate the origins of how people have been capturing images for the last century or so,” Merel said. “No matter your personal tastes or interests it's undeniable that, if nothing else, film is an excellent visual historic record.”

The class also explores the role of the cinémathèque, the differences between 35mm film and digital cinema, and the efforts to preserve and restore classic films. More meaningfully, students like Merel have a hand in expanding the history of film.

“Students end the semester completing a short individual research project and collaborating to contribute new information to the Wikipedia entries for a film we watched,” Pepper said.

Merel’s favorite experience was the screening of “So This is Paris,” a rare silent film from 1925 that was presented with live organ accompaniment—all from the comfort of Northeastern’s Auditorium.

“The series puts us on the map with the broader film community and spreads the word about Northeastern as a key place for film screenings in Chicago,” Pepper said. “For our students, I think it’s incredibly valuable for them to see film on film. It’s an increasingly rare experience these days.” 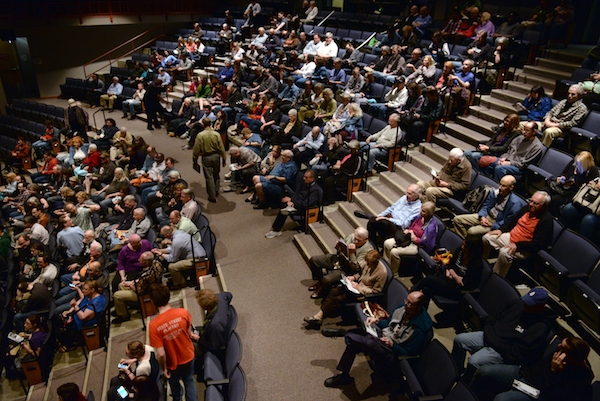 Above photo: The Chicago Film Society makes its debut in Northeastern’s Auditorium on July 1, 2015.