When Anna Pavichevich took over as principal of Amundsen High School in July of 2012, the school had been on probation for 11 years. Families were choosing to put their children on city buses to attend high schools with better reputations rather than the one in their own Lincoln Square neighborhood on the North Side of Chicago. And the students who did attend Amundsen were struggling with their academics and attendance.

While Pavichevich knew what she was getting with Amundsen, she didn’t know what she was about to get. That summer, Chicago Mayor Rahm Emanuel challenged the city’s colleges of education to help improve the high schools in the beleaguered Chicago Public Schools school district. Two miles west of Amundsen—a straight shot down Foster Avenue—that call to action was answered by Northeastern Illinois University. “Amundsen had a new principal coming in who had supported the College of Education when she was at her previous schools,” recalled Maureen Gillette, dean of the College of Education. “I called Anna to see if she would be interested in working together.”

The answer was a resounding yes—though Pavichevich tells the story a little more colorfully. Pavichevich and Assistant Principal Kristi Eilers had been at Amundsen for less than two weeks when Gillette called. “We didn’t even know where the bathrooms were yet,” she said. “When the dean called, the clouds parted and rays of sunshine beamed down from the heavens. Before our teachers walked through the door to start classes in the fall, Northeastern already was influencing the future of instruction.”

Indeed, by virtually every measure, the partnership has been a success. Amundsen was off probation within a year. And three and a half years since Pavichevich answered Gillette’s phone call, enrollment and attendance are up, more students are on track to graduate on time, the number of high-achieving students has grown, standardized test scores have improved, and students, faculty, staff and community members are once again talking about pride in Amundsen High School and what they call The Viking Way: “Accountable. Honorable. Scholarly. All day. Every day.”

It would be misleading to attribute Amundsen’s improvements solely to the partnership with Northeastern, or to say that Amundsen is the only beneficiary in the relationship. While Amundsen has gained a partner institution that commits faculty and financial resources to its success, Northeastern in return receives opportunities for its faculty members to get hands-on interaction in an urban high school, preferred placement for its student teachers and a golden opportunity to fulfill the University’s stated value to be an active and engaged member of the community.

“Northeastern has always been recognized as an educational institution that one could say specializes in helping to mold great teachers for our city and surrounding area,” said Alderman Patrick O’Connor, whose ward includes Amundsen High School. He pointed directly to the student teacher program, adding, “Northeastern’s involvement with Amundsen helps our high school students through the exposure to motivated college students who are well-prepared to present the lessons of the day.”

Northeastern’s partnership with Amundsen began with three primary goals: increase the effectiveness of classroom instruction through professional development, support collaborative school management, and engage local community groups to ensure student success. If those goals sound broad, that is by design. “This partnership is not a nicely wrapped package with a bow,” Pavichevich said. “It has so much fluidity to it. It’s whatever we need and whatever you need.”

Gillette remains heavily involved and attends events sponsored by Friends of Amundsen, the high school’s community support group that was created the spring before Pavichevich’s arrival. The nonprofit group promotes the school’s visibility and relevance in the community, and even helped secure a donation from the Chicago Cubs to improve the school’s weight room. “It’s been so exciting to see the positive effects of these efforts around Amundsen High School,” Gillette said. “We have meshed exceptionally well in our commitment to support high-quality teaching and learning for both Amundsen and Northeastern faculty and students.”

Several Northeastern faculty members have been involved in the partnership over the years in roles both big and small, and as many as seven Northeastern students have been student teachers at Amundsen in any given semester. 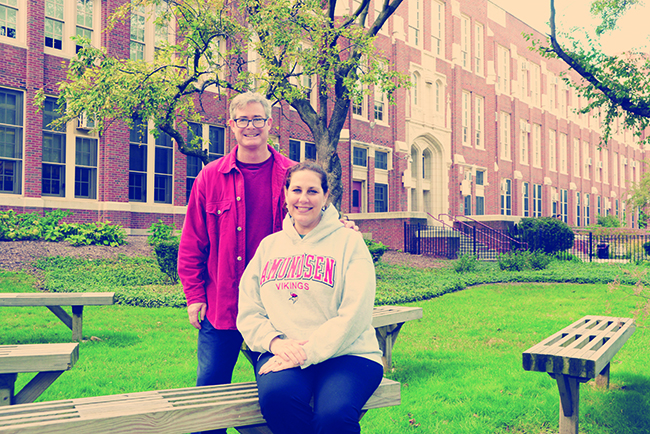 The Secondary Education faculty selected Tim Duggan, associate professor of Educational Inquiry and Curriculum Studies, to be the faculty member in residence at Amundsen. Duggan has helped foster partnerships for teachers in English, the sciences and the arts, conducted research that has led to improvements in instruction, and offered constructive criticism and guidance to teachers who might be intimidated to hear such feedback from school administrators.

Duggan’s affinity for the high school was cemented that first summer when he was caught in a torrential downpour on his way to a professional development meeting for Amundsen teachers. Upon seeing her new partner arrive on time but completely soaked, Pavichevich immediately supplied Duggan with the best dry clothes she could find. “I sat through the whole meeting wearing full Amundsen gear,” Duggan said. “I’m a Viking now. I love the place.”

Duggan walks through the school’s freshly painted halls like he’s been there his whole career. He knows the faculty members, some of whom were his students at Northeastern. He also helped create a writing center and a popular monthly open mic event for students, all of whom now have been there since Pavichevich and Northeastern arrived. The open mic series culminates with a year-end showcase at a nearby café.

One area where Pavichevich felt Amundsen could immediately improve was in encouraging student participation in the classroom. In cooperation with Gillette—whom Pavichevich described as an instruction expert and “thought partner”—Amundsen moved away from the traditional approach of seating its students in rows. “You can’t take away the impact of students having authentic learning experiences where they can talk and learn from one another,” Pavichevich said. “The focus is now on learning rather than teaching.” Naturally, none of this could have been possible without the support of a staff that was ready, willing and able to collaborate on best instructional practices with the new administration.

Duggan has followed up by collecting data around what is happening in the classrooms and even shadowed students to observe their complete high school experience. As an academic with experience in research, he is able to synthesize the data and turn it into action steps for Amundsen that have led to improvements in classroom performance. Preliminary numbers indicate Amundsen students’ ACT scores are up almost a point and a half in the past year alone, and daily attendance has surpassed 90 percent for the past three years in a row.

Two years ago, Northeastern and Amundsen initiated a focus on student literacy and something called “close reading,” in which students would concentrate on the careful interpretation of a brief passage. This school year, Northeastern will make its faculty available to work with Amundsen’s course teams, or groups of teachers who are teaching the same course. “It’s all about effectiveness,” Duggan said. “It’s about increasing the level of rigor in the classroom.”

In the spring of 2016, Eman Sarhan will bring her students to their fourth consecutive Student Research and Creative Activities Symposium at Northeastern. In the past, her students have created projects around catapults, robots and the physics of sound waves, and this year they are pondering a project based on 3-D modeling. “Through the science projects, students started developing their conceptual understanding by experiencing scientific phenomena, designing, building, testing and revising scientific models, and interpreting the related concepts,” said Huseyin Colak, an associate professor of Secondary Science Education in the Department of Educational Inquiry and Curriculum Studies who has worked with Sarhan since 2012. “I think it was a great opportunity for them to think seriously about attending college.” 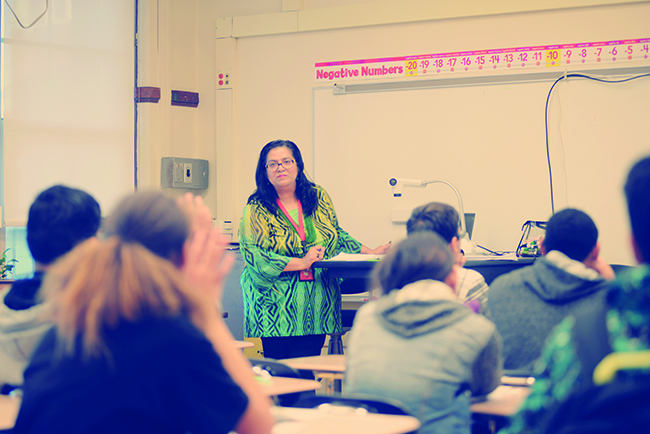 Mayra Bravo-Gonzalez, who graduated from Northeastern through the Grow Your Own Teachers program, teaches a math class at Amundsen.

Faculty members at Amundsen agree that students are thinking more seriously about attending college—and one in particular. “I hear our students talking about Northeastern,” said Amundsen English teacher Niki Moylan, whose course team worked closely with Assistant Professor of Educational Inquiry and Curriculum Studies Alison Dover. “With the opportunities Northeastern has made available, I hear ‘I’m going to Northeastern’ more often. That’s awesome because Northeastern is a great school right in our backyard.”

And Northeastern could say the same thing about Amundsen. Colleges of education can sometimes find themselves the targets of criticism from teachers who find academics to be out of touch with what’s really happening in schools. “This partnership puts our faculty on the ground in classrooms,” Duggan said. “That critique can’t be leveled at us. Our students are going out there well-prepared, and part of that is that our faculty are in the schools. It’s not theoretical; we’ve been there.”

Kyle Learn, an Amundsen teacher in Social Science, knows that better than anyone. One of a handful of Amundsen teachers who earned his degree from Northeastern, Learn was a student teacher at Amundsen in the fall of 2012 before graduating that December. In 2014, he served as a long-term substitute teacher at Amundsen before being hired full-time in 2015. “Everything that Northeastern prepared me for, I’ve seen it here,” he said.

There is no sign that this partnership built on respect and mutual admiration will slow down any time soon. “Parents in the neighborhood are starting to say, ‘Yeah we do want to send our children to Amundsen,’” Duggan said. “There is a buzz about the school now.”

Pavichevich feels it too. “We are going to be a school that reflects the values and expectations of our community,” she said. “The people in this community want to be able to send their children to the best colleges and universities. This partnership with Northeastern Illinois University has helped make Amundsen a competitive option. My colleagues talk about their partnerships with the University of Chicago and Northwestern. I’m always sure to tell them all about Northeastern.”