Randa Jarrar will read from and sign her debut novel, “A Map of Home,” on Feb. 4 as part of Northeastern Illinois University’s Visiting Writers Series.

Free and open to the public, the reading will take place at 3 p.m. in the Recital Hall on Northeastern’s Main Campus; 3701 W. Bryn Mawr Ave.

Jarrar is an award-winning novelist, short story writer, essayist, and translator who grew up in Kuwait and Egypt, and moved to the U.S. after the Gulf War. Her work has appeared in the New York Times Magazine, the Utne Reader, Salon.com, Guernica, The Rumpus, the Oxford American, Ploughshares and Five Chapters, among other publications.

“A Map of Home” was published in half a dozen languages and won a Hopwood Award, an Arab-American Book Award, and was named one of the best novels of 2008 by the Barnes and Noble Review. Her new book, “Him, Me, Muhammad Ali” will be released in 2016.

A recipient of fellowships from the Civitella Ranieri Foundation, the Lannan Foundation, Hedgebrook, Caravansarai, and Eastern Frontier, Jarrar was named one of the most gifted writers of Arab origin under the age of 40 in 2010. She runs RAWI (the Radius of Arab-American Writers) and loves coordinating events and strengthening communities.

Now in its fourth year, the Visiting Writers Series brings nationally and internationally renowned writers to Northeastern to read and engage with students and the community. 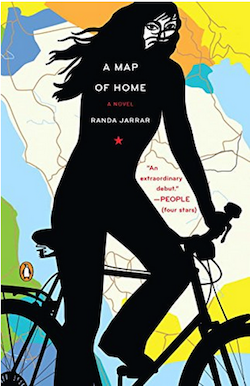