Johnny Dorsey graduated from Northeastern Illinois University in 1982 with a bachelor’s degree in Business and Management. Without the Project Success program, that accomplishment might not have been possible.

“I really couldn’t say where I would be if it hadn’t been for Project Success and the mentoring part of the program that really gave me a second chance,” said Dorsey, who is now the Assistant Dean of Students at Urban Prep West, a Chicago charter high school.

Now open to students of all ethnicities who may not meet the general education requirements to be accepted into Northeastern, Project Success marks its 50th anniversary this academic year. A dinner and awards ceremony featuring the music of Joan Collaso and the NEIU Black Heritage Gospel Choir will take place Feb. 15 in Alumni Hall to celebrate this special occasion.

Dorsey plans to be in attendance.

As a first-generation college student, Dorsey didn’t understand the process for accepting a track and field scholarship offer from the University of Arkansas at Pine Bluff and missed the deadline to attend. Dorsey then joined a friend for a visit to Northeastern.

“There was a woman working here at the time, her name was Sharon Sebastian,” Dorsey said, recalling the program counselor. “She asked me why I wasn’t registering and I told her I hadn’t applied. She walked me through the process and from there it’s all history. I was really grateful to get into school.”

A large component of Project Success is mentorship. Students are mentored by faculty advisors, and students mentor each other during peer-to-peer study sessions. Students are enrolled in a seminar course, which covers everything from understanding financial aid to learning study techniques.

“Me being a first-generation college student, my parents did the best that they could, but since they’d never gone through the process, the support I got from home was moral support,” Dorsey said. “I needed other support when it came to financial aid and understanding what that meant and study habits.”

After his graduation, Dorsey took the tools and mentorship skills he learned and became a Project Success advisor. He continues to work in the fields of mentorship and education, and last year earned the Teacher of the Year award at Urban Prep West. Project Success will honor Dorsey with a Legacy Award during the Feb. 15 ceremony for his longtime contributions to Project Success and positive influence on students.

Project Success was founded at the insistence of the African American students at Northeastern in the ’60s, in the wake of a Supreme Court ruling that identified five factors to ensure all schools were complying with Brown vs. the Board of Education ruling of 1954. At the time, Northeastern enrolled only a handful of students of color. Stewart refers to them as “trailblazers.”

Roosevelt Gordon was one of those students. He was admitted to Northeastern in 1967, when it was known as Chicago Teacher’s College North. The school changed its name to Northeastern Illinois State College in the fall of that year.

Gordon recalled that at the time the campus consisted of only one building known as the “Beehive” (Jerome M. Sachs Administration Building), which contained connective pathways to the A and B wings. The student population at that time was approximately 700 to 800 students. Just getting to campus often presented a challenge as public transit was not as developed as it is today. In addition, the school had no residence halls, and the Fair Housing Act wasn’t passed until 1968, so renting an apartment near campus was virtually impossible.

In spite of these challenges, Gordon and others made it to campus and were determined to succeed. He and other African American students wanted the University to recognize that there were more talented and deserving students just like them, who deserved a chance to receive a college education. They urged the university’s president, Jerome Sachs, to bring in a professional to create an academic support and recruitment program to expand the African American student population.

William Speller was hired as the first coordinator of Project Success. Speller brought with him the formula for student achievement: Opportunity plus Capacity plus Motivation equals Success, or O+C+M=S.

According to Gordon, Speller believed that if students were given an opportunity, met at their capacity and taught skills beyond it, and they could stay motivated, then they would ultimately succeed.

“Students I see today have so much broadband of opportunity,” Gordon said. “I had to take mine as the legislature permitted. I couldn’t just jump out and do something. There just wasn’t any way that institutions, people, individuals were going to allow me to just jump out. So, as I got one opening, I exhausted the opportunities in that opening, then waited; got another opening, utilized those opportunities and then moved gradually on.”

Though Gordon was not a student of Project Success, he was a student worker under Speller in 1970. Gordon became a program associate in 1974, and went on to be the program’s coordinator from 1977-2003, when he retired from Northeastern. Since 2003, he has been working part-time in Northeastern’s Office of Student Disability Services.

Gordon is proud of the fact that Project Success has maintained its presence at Northeastern for as long as it has, serving as a precursor to programs and student activities such as the Black Heritage Club, Black Caucus and Proyecto Pa’Lante.

Stewart is eager to honor the individuals who have shaped Project Success over the past 50 years.

“People who have been former coordinators, former directors, as well as students—both alums and current students,” she said. “I want to celebrate them because they are the people who’ve made this program what it is.”

Tiera Applewhite, a current freshman in Project Success, first stepped on campus for a class trip when she was in third grade and knew she wanted to attend Northeastern.

“Project Success helps so many students change their frame of mind from, ‘Oh, I could never do this, I would never be able to do this’ to ‘Oh, I got this! That’s what I’m going to be in the future,’” said Applewhite, who was recently awarded a scholarship from Project Success for academic achievement and high level of program engagement. “It just builds our confidence and builds who we are as people.”

Applewhite also had a message for those who helped start Project Success: “Thank you. They did a great job.”

Tickets to the Project Success 50th Anniversary Dinner and Awards Ceremony are available through Feb. 12. Donations can also be made to Project Success to fund the program scholarship through Northeastern's Giving page. Under "designation" select “other” and type Project Success. 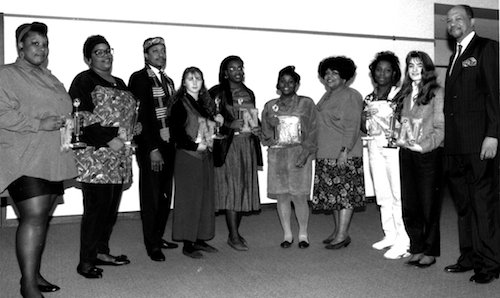