Noteworthy at Northeastern: Working in the community

Northeastern Illinois University is always working with its community partners. Now that spring has arrived, those volunteer efforts are moving outside. We’ve got more on the Cesar Chavez Day of Service, El Centro’s feature on ABC7 and lots more!

For a third year, Northeastern will celebrate the life and work of American farmworker, labor leader and civil rights activist Cesar Chavez through local volunteer work by students, staff and community members. The Cesar Chavez Day of Service is March 28, and Northeastern is partnering with community organizations and schools in the Albany Park neighborhood.

Linguistics Professor Richard Hallett has written a chapter in a recently published book titled “Encounters with Popular Pasts: Cultural Heritage and Popular Culture.” Hallett’s chapter, “Parodying Heritage Tourism,” analyzes three parodic travel guide books about countries that do not exist but are readily recognizable. Also from the Department of Linguistics, master’s student Zach Gordon and master’s alumna Erica Sosa have published a chapter in “Religion and Language” titled “Pray What You Mean: Balancing Integrity of Belief and Continuity of Tradition in a Secular Humanistic Jewish Congregation.”

Department of History Assistant Professor Joshua Salzmann and Associate Dean of Libraries Dave Green have co-authored a grant proposal that was awarded $4,999 by the Consortium of Academic and Research Libraries. The proposal was titled “Unlocking Chicago’s History: A Guide to Conducting Research in Chicago City Government Records.”

After weeks of planning and filming, ABC7 aired its “Ñ Beat” feature about El Centro on March 21. The half-hour show was hosted at El Centro by Stacey Baca and Hosea Sanders, and it highlighted the students, architecture, mission and history of the location. 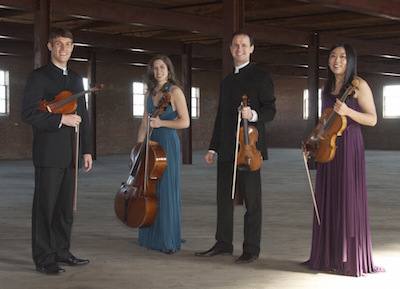 The Kontras String Quartet, one of the most sought-after chamber groups on the scene, will perform Friday, April 17, in the Recital Hall as part of the Jewel Box Series. The group presents a global perspective in showcasing its music in new and artistic ways.

The sound of silence

“Chicago: A World City Stretches Its Wings,” a silent film about Chicago shot in 1931 by German novelist, poet and filmmaker Heinrich Hauser, will be shown at 7:30 p.m. on Friday, April 3, in the Recital Hall. The film will feature a new music soundtrack created and performed live by the NEIU Jazz Combo and directed by Mayo Tiana with contributions from faculty members Jeff Kowalkowski and Kathy Cowan as well as students.