The calendar just got packed: Northeastern Illinois University is planning a diversity conference, the launch of a disability program, an economic inequality initiative and a budget lobbying trip to Springfield. Read all about those plans and lots more!

Northeastern’s Diversity Council will host its inaugural conference, Spotlighting Diversity Matters: Celebrating Our Intersectional Identities, on Tuesday, April 7, in Alumni Hall. The purpose of the conference is to have conversations that empower members of the University community to become agents of change.

Led by the Office of Student Disability Services, the (Dis)ability Project is a comprehensive training and resource program that will launch on Thursday, April 9. Guest speaker Isabel Garcia, president of Parent to Parent of Miami, Fla., will talk about how Northeastern can support Latino students with disabilities in the transition from K-12 to higher education.

Northeastern will launch its participation in the Economic Inequality Initiative on April 6. The College of Arts and Sciences and the Division of Student Affairs invite the University community to join the national discussion on economic inequality.

The Asian and Global Resource Center will host the 5th Annual Asian American Heritage Awards Gala on Friday, April 10, at 5:30 p.m. in Alumni Hall. A tribute to Asian and Asian-American traditions, the gala celebrates the achievements of Northeastern graduates and members of the community.

By Illinois law, all state university property will become smoke-free beginning July 1. Visit neiu.edu/somkefree to read about what that means for Northeastern’s locations. 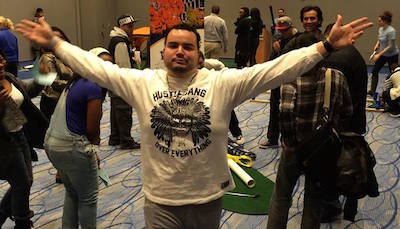 Kirkus published a positive review of English Assistant Professor Julie Iromuanya’s new book, “Mr. and Mrs. Doctor,” which is due out next month. The review raves: “Iromuanya presents a fascinating and often hilarious drama of marriage, highlighting the discrepancies between who we say we are and who we really are.”

Lori Baker, an associate professor of Anthropology at Baylor University who specializes in molecular and forensic analysis of skeletal remains, will speak at Northeastern on April 9. Baker is the founder and director of the Reuniting Families Project, which was created to establish a system for the identification of the remains of deceased undocumented immigrants found along the U.S. border with Mexico.

Northeastern’s chapter of the Illinois Education Association will host alumna Tammy Oberg De La Garza, co-author of the book “Salsa Dancing in Gym Shoes: Exploring Cross-Cultural Missteps with Latinos in the Classroom.” The event will be held from 4:30-6 p.m. April 9 in the Pedroso Center. Books will be available to purchase from Beck's if guests would like to get a signature.

The Office of Student Disability Services provides academic and technical assistance to students and works closely with faculty to ensure student access. The office also has some mad Twitter skills! Follow @NEIUsds for SDS news and updates, event information, resource guides and a whole lot more.