Noteworthy at Northeastern: A special student

Northeastern Illinois University is filled with so many inspirational stories. This week, we highlight a Special Education major who is on a mission to empower individuals with disabilities. Read about Victoria Valentine and much more in this week’s edition of Noteworthy at Northeastern.

Victoria Valentine (pictured above) always knew she wanted to be a teacher, but it wasn’t until she volunteered at a summer camp during sixth grade that she realized she wanted to pursue special education. During the camp, Valentine was assigned to work with a young autistic boy and began to see the world from his perspective. Read about Valentine’s journey as she moves closer to earning her Bachelor of Arts in Special Education from Northeastern next year.

2014 Distinguished Alumnus Award winner William Pollakov has been inducted into the GAMA International Management Hall of Fame. It is the highest honor given by the financial services industry to recognize an individual field leader whose professional career has been spent building a field organization and serving the industry. Pollakov, an honorary member of Northeastern’s Beta Gamma Sigma business honors society, is president and CEO of The Pollakov Financial Group Inc., one of the premier financial services organizations in California. He also is the president and founder of the Bikes for Kids Foundation, a charitable organization that has given away more than 36,000 new bikes to disadvantaged children. Pollakov graduated from Northeastern in 1970 with a bachelor’s degree in Elementary Education: Physical Education.

How to Raise a Human

NPR is in the middle of a monthlong project titled How to Raise a Human, in which its reporters travel the world to seek ideas to make parenting easier. As part of its reporting, NPR visited Professor Emeritus of Psychology Suzanne Gaskins in a Maya village in Mexico. Gaskins has spent much of her career studying how Maya moms in the Yucatan raise helpful children. “Some of the approaches families use in other cultures might fit an American child's needs better than the advice they are given in books or from the pediatricians,” Gaskins told NPR. Gaskins was quoted in three stories covering the topics of getting children to do chores, secrets of a Maya super mom and how to get kids to pay attention.

A tribute to a trailblazer

A book published last year about Northeastern Vice President Emeritus of Student Affairs Melvin C. Terrell has gained renewed interest after it was highlighted by Diverse: Issues in Higher Education. “Advancing Equity and Diversity in Student Affairs: A Festschrift in Honor of Melvin C. Terrell” is a volume in Information Age Publishing’s book series “Contemporary Perspectives on Access, Equity, and Achievement.” “[Terrell] was one of the original architects for student affairs and academic affairs working together,” Jerlando F. L. Jackson, a book co-editor, told Diverse. “And what he did, by being able to speak the language and be contributor to the academic mission, he was able to build bridges that others were able to see, follow, model and cross over.”

Ensemble Español’s 2018 American Spanish Dance & Music Festival performances at the North Shore Center for the Performing Arts were a tremendous success, and the news media took notice. The Flamenco Passion: A Tribute to Jose Greco’s 100th Anniversary performances drew coverage from the Chicago Tribune, See Chicago Dance, WTTW, Univision, WGN, Dance Magazine and Splash Magazine. With all of this success, it is no surprise that Ensemble Español’s’ Raised in Chicago match campaign has raised $349,000 to date with a year left to go.

One of Northeastern’s oldest living alumni is still making news at age 95. Nancy Weinberg (B.A. ’82 Art) was featured by Chicago Jewish News for her incredible portraits. “When painting, I feel very committed. I forget my aches and pains, forget anything negative,” she told the Chicago Jewish News. “It’s a healing process, challenging but healing.” 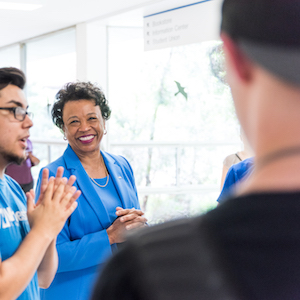 How's your summer semester going? Show us on Instagram! Follow @neiulife to see photos of our summer and tell us about your #neiulife experience.