Noteworthy at Northeastern: See you in 2018!

That’s it, folks! Another calendar year is in the books at Northeastern Illinois University.

We’ve got stories, videos and photos from Commencement, a final tally on a fundraiser organized by Educational Leadership-Higher Education graduate students and a special holiday video in the year’s final edition of Noteworthy at Northeastern.

Adapting a moment made famous by her former boss and mentor, alumna Alice McGee announced she had a special gift for the graduates from none other than Oprah Winfrey during Northeastern’s Commencement ceremony. Check out more from Commencement and graduation-related events: 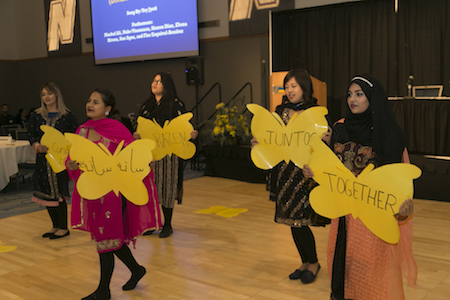 For students, by students

Each year, Associate Professor of Literacy, Leadership and Development Gabriel Cortez challenges his Human Relations and Leadership class to create a group activity that results in learning and real-world impact. This year’s class not only organized an event to raise awareness about undocumented students—they also made it a fundraiser that pulled in more than $9,600 in pledges and contributions to support scholarships and resources for undocumented students at Northeastern.

Autism and the holidays

The holiday season can be difficult for people with autism. WGN interviewed Northeastern alumnus Christopher Jones (B.A. ’15 Psychology), supervisor of life skills and job coaching at Have Dreams, about how people with autism can thrive during this time of year.

Chicago Board of Health appointment

Northeasern alumnus Juan Calderon (B.A. ’14 Interdisciplinary Studies) has become the first openly gay Puerto Rican/Latinx man named to a seat on the Chicago Board of Health. “This appointment means a great deal to me,” Calderon told The Windy City Times. “I want to be a voice that helps intersect the community and its development to public health, including encouraging Chicagoans to lead overall healthier lives. As a gay man, it is important to me to promote changes and improvements in the overall health of the LGBTQ community.”

It’s not just Commencement videos, of course. Check out Northeastern’s official YouTube channel to see the above holiday video, speeches from special guests, coverage of University events and messages from the president.