Northeastern Illinois University’s Reunion weekend is upon us—and some of the alumni are on stage! We’ve got details on the two-day festivities, the Northeastern-influenced band that will take the block party stage and lots more good news from around the University.

One of Chicago’s hottest bands has deep roots at Northeastern. Willy Dynomite is fresh off performances at Double Door, Schubas and Navy Pier, and the 10-piece band is set to make a triumphant return, taking the stage Oct. 2 as part of the University’s first Homecoming Block Party. “We play original soul music,” guitarist and vocalist Stephanie Stahl said. “With 10 people, it’s pretty loud, big and dynamic.” The Homecoming Block Party is just one aspect of a busy Alumni Reunion weekend.

A fellowship in South Africa

Associate Professor of English Chielozona Eze has been named a fellow by the Stellenbosch Institute for Advanced Study. Eze was one of 60 scholars and researchers selected to receive this 2016 STIAS fellowship. Starting in January, he will spend six months at STIAS, located in Stellenbosch, South Africa, to work on the book project titled “Transcultural Affinity: Cosmopolitan Imagination in Post-Apartheid South Africa.”

President Sharon Hahs will be presented with an award Oct. 8 at the National Society of Hispanic MBAs Conference & Career Expo in Chicago. Hahs will receive the award after Northeastern established the first undergraduate chapter in NSHMBA history earlier this year. Northeastern also will serve as the academic co-lead of the event. 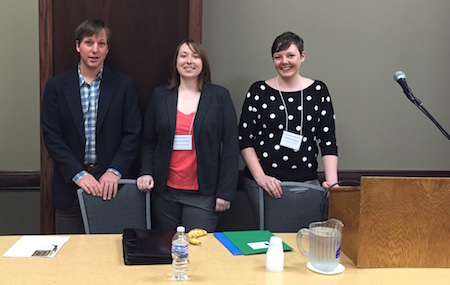 Two students and two recent graduates joined Assistant Professor of History Joshua Salzmann at the Sept. 24-25 Conference on Illinois History that is attended by academics, archivists, museum staff and teachers. Salzmann presented a portion of a book he is writing titled “Safe Harbor: Space, Nature, and Capitalism on the Chicago Waterfront.” Here are the students who presented original research performed in Salzmann’s classes:

Northeastern ranked fifth out of 71 colleges and universities in the Chicago area for student applications to participate as election judges in three elections from October 2014 to May 2015, according to a recent report released by the Chicago Lawyers’ Committee for Civil Rights Under Law.

The Chicago Tribune published a story about Special Education Instructor Mindy Ugolini, who will head up the Walk for Hope to Cure Breast Cancer on Oct. 4 in Highland Park. "This is going to be a fun, family-oriented day that will be rewarding to those who attend because they will be giving back to the community and saving lives,” Ugolini said.

Bring on some jazz!

Ever wonder what the Alumni Association is up to—besides this weekend’s Reunion festivities? Follow along and join its network of influential and outstanding alumni on LinkedIn, Facebook and Twitter. The accounts will keep you updated on fun events, class notes, membership benefits, scholarship opportunities and more!

El Centro celebrated the one-year anniversary of the new building’s grand opening on Sept. 30 by sharing videos, photos and stories on Facebook. Check out the time-lapse video of the building’s construction above!