Noteworthy at Northeastern: The Nest is here!

A mere 15 months after breaking ground on the project, Northeastern Illinois University has opened its first residence hall! Read all about The Nest, plus get the latest on research results, Jewel Box Series concerts and more!

With the snip of a ceremonial ribbon and a blast of blue-and-gold confetti, Northeastern Illinois University opened The Nest, the first residence hall in the institution’s history, on Aug. 19, 2016. Immediately after the ceremony, students and their families began the exciting process of move-in day. “Throughout my decade as president of Northeastern, I have witnessed the University undergo many transformations,” President Sharon Hahs said. “One of the most significant transformations is currently underway, and it is the result of the efforts of many who helped to erect this beautiful structure standing right before us.” Check out the Facebook photo album!

Serving as University president isn't always easy. In this week's installment of our series of video clips featuring retiring President Hahs and Interim President Richard Helldobler, they discuss the biggest challenges of the presidency.

Sometimes when you need something, you have to make it yourself. That’s exactly what Anthropology Professor Jon Hageman and his team have done with the Mesoamerican Ethnobotanical Database. Having already demonstrated that ancient botanical remains could be collected from lowland tropical locations during excavations of prehistoric Maya sites in Belize, the team discovered that few resources existed to identify the family, genus or species of the specimens. Thus began the journey from problem to solution that became available online to anyone in the world in January 2014 as a work in progress and fully completed on March 15, 2016.

Northeastern has been selected as a member of the 2016-17 Lead Initiative as a Lead Advisory Institution by NASPA - Student Affairs Administrators in Higher Education, the leading voice for the student affairs profession. This is the fifth year Northeastern has been selected to participate but the first as an advisory institution. As a participating institution in NASPA’s initiative on civic learning and democratic engagement, Northeastern has committed to being a leader among American universities in encouraging students’ civic development through thoughtful community partnerships, engaging leadership opportunities and democratic participation. 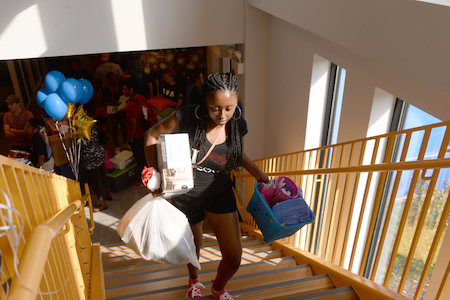 The opening of the University’s first residence hall continued to draw attention from Chicago’s news media. “I'm going to be saving a lot of time and a lot of stress,” junior Bella Vargas told DNAinfo Chicago. Her commute to class has now been cut from two hours to two minutes. “I'm really glad they built [The Nest] while I was still here.” The Polish Daily News also published a story about the opening of The Nest.

Growth of the M.B.A.

In a story about the evolution of M.B.A. programs in Chicago, Crain’s Chicago Business quoted College of Business and Management Dean Michael Bedell. “M.B.A.s are looking for the networking piece, and there's some value to the M.B.A. that's not related to the coursework,” he said. The story accompanied Crain’s annual report on Chicago-area M.B.A. programs.

The 2016-17 season of the Jewel Box Series is approaching! The season kicks off Sept. 16 with Germán López, a timple player from Gran Canaria, an island making up an archipelago off the coast of Africa.

Student housing has arrived at Northeastern! Let The Nest tell you all about the benefits and conveniences of living on campus. Find and follow them on Facebook, Instagram and Twitter for all of the latest news from the brand new residence hall.