Noteworthy at Northeastern: A major fellowship

The National Endowment for the Arts has awarded Northeastern Illinois University English Instructor Amanda Goldblatt a Creative Writing Fellowship. Find out more about the award, tonight’s Jewel Box Series performance and more in this week’s edition of Noteworthy at Northeastern.

English Instructor Amanda Goldblatt is one of 36 recipients nationwide to be awarded a National Endowment for the Arts 2018 Creative Writing Fellowship in the amount of $25,000. Selected from nearly 1,700 eligible applicants, Goldblatt teaches Creative Writing at Northeastern. Her work has been included in literary journals The Southern Review, the Fanzine, Tammy, Hobart and NOON, and Goldblatt is currently working on a novel, the project for which the fellowship was awarded. 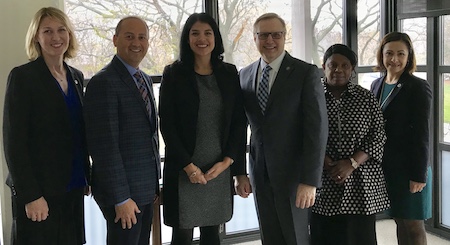 A visit from the city clerk

Chicago City Clerk Anna Valencia visited Northeastern on Nov. 13 to learn about the University and explore collaborative opportunities with her office. Valencia oversees one of the largest offices in Chicago, serving 1.2 million Chicagoans and generating more than $130 million annually.

Univision interviewed Anthropology Instructor Martin Giesso in the Pedroso Center for a story about DNA testing to discover family history. Giesso explained that DNA tests show that we have a much more complex ancestry than what we think, and that we usually have ancestors from different parts of the world. He emphasized that it is important to do these analyses to contribute to understanding the histories of migration and conquest.

Also in the media …

Flutist Demarre McGill will perform with pianist Victor Asuncion on Nov. 17 as part of the Jewel Box Series. Winner of the prestigious Avery Fisher Career Grant, McGill is acclaimed for his “richly saturated tone, spirited technique and expressive warmth” and has quickly become one of the most sought-after flutists of his generation. He enjoys an active career as a leading soloist, recitalist, artistic director and chamber musician.

If you are a current student, be sure to follow NEIU Students on Facebook to stay up to date on events, deadlines and tips for making the most of your time at Northeastern.