Ensemble Español Spanish Dance Theater has launched its 40th-year celebration at Northeastern Illinois University. As if that weren’t enough to get excited about, the University also announced a major film society partnership, prepared for a new graduate certificate program and collected more awards.

Ensemble Español has kicked off its 40th year at Northeastern with the 39th American Spanish Dance & Music Festival. The yearlong party will include the company’s first performances in Spain, a trip to San Juan, Puerto Rico, and a show in a 4,000-person amphitheater in the historic city of St. Augustine, Fla. Closer to home, the city of Chicago will give a stretch of Bryn Mawr Avenue an honorary name designation in recognition of Dame Libby Komaiko in August. Find out how much the company has accomplished—and where it’s going next—in the cover story for the new In Common magazine!

Roll out the silver screen

The Department of Communication, Media and Theatre has partnered with the Northwest Chicago Film Society to make Northeastern the institutional home for the NWCFS screenings of 35mm film prints. The screenings will be integrated into Northeastern’s film studies courses, which serve more than 200 students each semester. The Chicago Tribune’s movie critic, Michael Phillips, immediately reported on the news.

The Teaching English to Speakers of Other Languages department will offer a graduate certificate program beginning in fall 2015. The certificate will provide practical skills and knowledge to individuals who wish to teach adult English language learners. It is designed for teachers, tutors, or volunteers who want to work at community colleges, community-based programs, vocational programs, and private language schools or universities in the U.S. or abroad.

The Division of Student Affairs has won the 2015 Gold Hermes award for Internal Communication Campaign for the Student Affairs Orientation videos. There were more than 6,000 entries from throughout the United States, Canada and several other countries in the Hermes Creative Awards 2015 competition. Student Affairs also won two Publicity Club of Chicago Silver Trumpet Awards, for the 2013–14 Student Affairs Annual Report and for Orientation Videos. 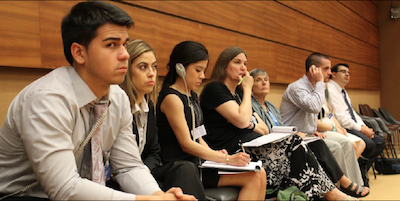 Justice Studies Professors Cris Toffolo, Nancy Matthews and Shelley Bannister took eight students to Geneva, Switzerland, from May 7-15 to learn about the United Nations system—particulary its role in trying to improve human rights. The group attended as the United States went through its second University Periodic Review.

Stage Center Theatre will present “With Two Wings,” by Anne Negri, on June 19 at 7:30 p.m. and June 20 at 2 and 7:30 p.m. In a fantasy world where people have wings, the play follows a young boy named Lyf who lives an isolated existence with his parents in the safe nest of their home deep in the woods.