Noteworthy at Northeastern: Global and local

From the Yucatán Peninsula to Chicago’s neighborhoods, Northeastern Illinois University’s faculty and students continue to make a difference locally and globally. Find out how, plus who’s been in the news and which events to put on your calendar.

Earth Science professors Laura Sanders and Ken Voglesonger recently returned from Mexico, where they studied the groundwater of the Yucatán Peninsula. The unique geology of the Yucatán makes its groundwater particularly vulnerable to contamination. Working with environmental and public health scientists from Northern Illinois University and the Centro de Investigación Científica de Yucatán, Sanders and Voglesonger are seeking to develop strategies for protecting the water supplies of cities such as Cancún. They plan to involve NEIU Earth Science students in the research.

Students from Northeastern’s Accounting Club are providing free income tax filing services to the community to assist low- and fixed-income families. The Ladder Up program serves individuals with an annual income of less than $25,000 and families with an income of less than $50,000. Each year from February until mid-April, students complete tax returns for individuals and families on a walk-in basis. The program provides a valuable service for the community while also offering accounting students hands-on, real-world experience. All tax preparations are supervised and approved by faculty of the College of Business and Management. 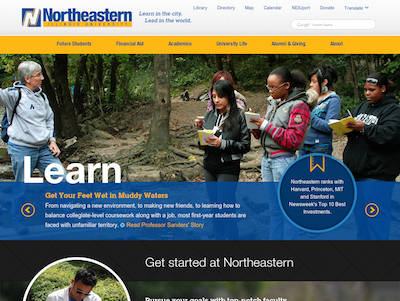 Northeastern’s new website, which launched with a sleeker, more user-friendly look in July 2014, won the people’s choice eduStyle Award for the best homepage. Thanks to all who voted for the Golden Eagles!

Linguistics Professor Judith Kaplan-Weinger’s father was featured in the Chicago Tribune after he was awarded the Army medals he earned in World War II. Kaplan-Weinger enlisted the help of U.S. Rep. Jan Schakowsky to make sure her father received the honors he deserved.

The World News and Morocco Gazette reported that Hicham Zerhouni (B.A. ’07 Board of Governors and Political Science; M.A. ’12 Political Science) has been selected as a fellow of the New Leaders Council, a U.S. nonprofit organization that promotes progressive political entrepreneurs. “I am so humbled to have this opportunity,” Zerhouni said.

Up next for Jewel Box

The Pedroso Center’s LGBTQA Resource Center has relaunched its Facebook page! The page focuses on current social, political and academic topics surrounding LGBTQA identities. You can also find updated information about events across campus related to gender and sexuality. Remember, the first step to being a good ally is to be in the know!