Teaming up against cancer 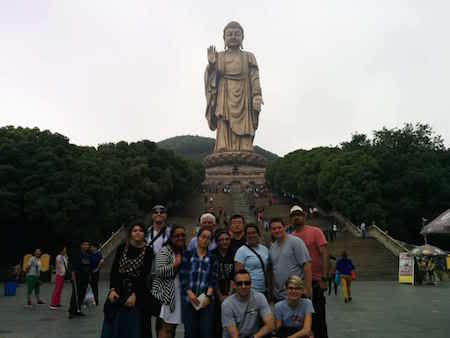 Under the direction of Art Professor Shencheng Xu and Accounting, Business Law and Finance Professor Rasoul Rezvanian, 10 Art students and two Business students recently made a 16-day trip to China as part of a collaborative design course with Jiangnan University School of Design in Wuxi. Art students created models of bike racks and park benches for a functional public art sculpture for a local middle school, while the business students created proposals for prospective clients. The group visited art galleries, museums, sculpture parks and historical sites in Shanghai, Wuxi, Hangzhou, Guangzhou, Wuzhen and Beijing. They met with local artists, businessmen and students to see their projects and companies, and to ask questions.

Goldie is getting ready for the 44th Annual Chuck Kane Scholarship Golf Event on Monday, Aug. 8. Be sure to sign up now and support student scholarships!

Sandra Williams is an associate professor of Human Resource Development, so naturally she’s in the news for ... conservation in agriculture? Yes, Williams and her brother, Scott, are featured in CountrySpirit magazine for their sustainability efforts. “Most recently they began a new conservation venture called Fields Restored that aims to stabilize 17 acres of highly erodible land while simultaneously turning it into a diverse, perennial, specialty-crop venture,” the story reads. “They’ve planted more than 30 species of perennials, including chestnuts, hickories, apples and raspberries.”