Noteworthy at Northeastern: A first for the University

For the first time in its history, Northeastern Illinois University will name a college after an alumnus and donor. Get all of the details on Daniel L. Goodwin’s extraordinary pledge to the University, plus news of a groundbreaking new partnership to address cancer-related health inequities in Chicago.

With a grant of $1 million, plus up to $1.5 million for an additional matching challenge over the next three years, Daniel L. Goodwin has provided an unprecedented commitment to Northeastern. Mr. Goodwin, Chairman and CEO of The Inland Real Estate Group of Companies, is a graduate of Northeastern who served as Chairman of the Board of Trustees from 1996 to 2006. In recognition of Mr. Goodwin’s extraordinary philanthropic support and leadership, Northeastern will name a college after an alumnus and donor for the first time in its 148-year history. The Daniel L. Goodwin College of Education will be dedicated during a ceremony and fundraising kickoff event in January 2016. 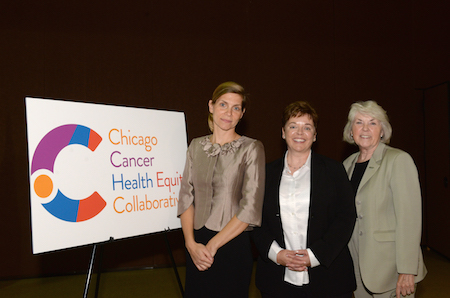 Northeastern is part of a new $17.4 million grant from the National Cancer Institute that will help three Chicago universities work together with many of the city’s underserved communities to foster meaningful cancer research, education, training and outreach. The five-year grant will support the creation of the Chicago Cancer Health Equity Collaborative, led by researchers from Northeastern Illinois University, the Robert H. Lurie Comprehensive Cancer Center of Northwestern University and the University of Illinois at Chicago. (From left: Principal investigators Christinia Ciecierski and Moira Stuart are pictured above with President Sharon Hahs at the Oct. 23 press conference.)

A grant for AGUA

English Instructor Larry O. Dean has released his 13th solo album and his first since 2009, “Good Grief.” “I grew up in a town with crummy radio, but I started reading about music that sounded much more interesting to me in magazines and fanzines, and that led me to seeking it out on my own,” said Dean, a native of Flint, Mich. “I guess my need to discover has been a major component of my creative education.” 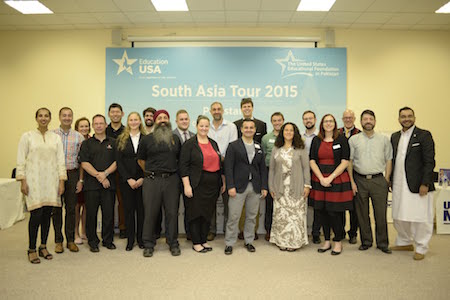 The Office of International Programs represented Northeastern as one of 19 universities on a tour of South Asia to promote study options in the United States. The tour was organized by the United States Educational Foundation and Education USA, and so far has earned international media attention from Dispatch News Desk, The Nation, Pakistan Press, TVI, The Islamabad Scene, Dawn and the Express Tribune.

Northeastern will host a roundtable event on Oct. 29 as part of the University’s Economic Inequality Initiative, a partnership between the College of Arts and Sciences and the Division of Student Affairs. One of the primary objectives of the Initiative is to help students think about and take action to confront the complex causes of growing economic inequality.

Want to stay on top of Northeastern’s participation in the new Chicago Cancer Health Equity Collaborative? Follow the collaborative’s brand-new Facebook and Twitter accounts to get the latest details!