NEIU Weekend is here and we have lots to celebrate! U.S. News & World Report cited more reasons for students to consider attending Northeastern Illinois University, Google brought an exciting partnership to campus this summer, and an instructor earned a prestigious award nomination. Read all about these stories and more in this week’s edition of Noteworthy at Northeastern.

Northeastern Illinois University graduates its students with the least amount of student debt among Midwest regional universities, according to the 2020 edition of U.S. News & World Report’s “Best Colleges” publication. Northeastern is also listed as the No. 1 public university in the region for diverse student population and social mobility. 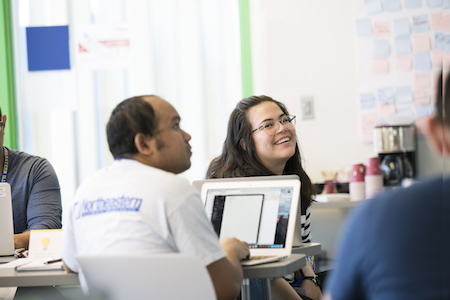 Northeastern Illinois University was one of nine schools—and the only one in the Midwest—to host Google’s Computer Science Summer Institute Extension. The goal of the program is to increase the number of women, underrepresented ethnic minority students, first-generation, and low-income college students in the field of computer science. The program gave 14 incoming students the opportunity to immerse themselves in a three-week intensive to learn coding languages, explore Google’s Chicago offices, and learn about what it takes to build a career in technology.

G. “Max” Maxin IV of the Communication, Media and Theatre Department received an Equity Jeff Award nomination for Best Projection Design for the American Blues Theater production of “The Absolute Brightness of Leonard Pelkey.” This is his first nomination for Projection Design. His previous Jeff Award nominations have been for Lighting Design. The Joseph Jefferson Awards celebrate the vitality of Chicago area theatre by recognizing excellence through recommendations, awards and honors. Earlier this year, Max presented "Projections on a Small Budget" at the United States Institute for Theatre Technology (USITT) Annual National Conference in Louisville, Ky. Appearing with him were the Lead Projectionist for Cirque du Soleil and the Lighting Supervisor of Northwestern University's Theatre Department. The 2019 Equity Jeff Awards will be announced on Oct. 21.