Noteworthy at Northeastern: Fall 2018 has begun

It began with Golden Eagle Welcome Day, and now the first week of the Fall 2018 semester is coming to an end at Northeastern Illinois University. Read about a faculty member’s summer studies on racism at Oxford University, alumni featured in the news and much more in this week’s edition of Noteworthy at Northeastern!

On antisemitism and racism

Assistant Professor of Educational Inquiry and Curriculum Studies Sunni Ali recently returned from the Institute for the Study of Global Antisemitism and Policy’s (ISGAP) Oxford Summer Institute for Curriculum Development in Critical Contemporary Antisemitism Studies. The summer institute took place in St. John’s College at Oxford University from July 29 through Aug. 10. A total of 20 scholars from around the world—eight of them from the United States—were chosen to attend the Jewish Academy to study antisemitism and racism. “I hope to bring back to Northeastern’s classrooms the invaluable lessons I learned and gained from abroad while also sharing my thoughts and experiences with students and colleagues,” Ali wrote in an essay about his experience.

Lessons from an advisor

The Forest Park Review profiled alumna Lizzeth Fausto (B.A.’07 Bilingual-Bicultural Education and Elementary Education-Teacher Education) and her journey from Mexican immigrant to bilingual educator. Fausto, who is now an Educational Leadership graduate student at Northeastern, said a conversation with her advisor changed the course of her career. “He said, have you not looked in the mirror ... have you not look at the demographics of our growing population for students ... you are a Spanish-speaking individual,” Fausto told the Forest Park Review. “You need to be a bilingual education teacher.”

Three-time Olympic gold medal track and field athlete Jackie Joyner-Kersee will participate in a talk titled “An Evening With Jackie Joyner-Kersee” as Northeastern presents the fourth installment of the Daniel L. Goodwin Distinguished Lecture Series on Sept. 11. Dubbed “The Greatest Female Athlete of the 20th Century” by Sports Illustrated, Joyner-Kersee is second to none. She won six Olympic medals (three gold, one silver, two bronze) and four World Champion titles over four consecutive Olympic Games. Both President Gloria J. Gibson and Joyner-Kersee were born in East St. Louis, Ill. In 1988, Joyner-Kersee established the Jackie Joyner-Kersee Foundation, which provides youth, adults and families with the resources to improve their quality of life with special attention directed to East St. Louis. 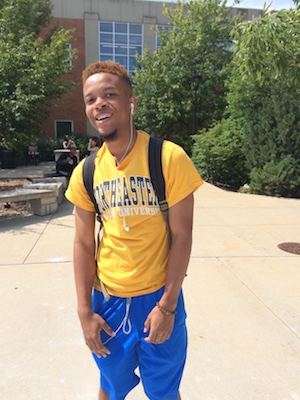 Did you know Thursday is #NEIUspirit Day? We love Lashaun's look! We're showcasing Golden Eagle spirit on Instagram @NEUlife. Show us your spirit. Inbox us a pic of yourself in NEIU gear for a chance to be featured on Instagram and on the screens around campus.