Diversity Week at Northeastern Illinois University did not disappoint. While the University celebrated cultures from around the world, it also celebrated the launch of a continuing education office, faculty successes and the debut of a new play.

Best of the year!

An article co-written by Psychology Professor Breckie Church has been selected by Routledge Education to appear in a collection of the most-read pieces from its journals in 2014. “How Teachers Link Ideas in Mathematics Instruction Using Speech and Gesture: A Corpus Analysis,” which was the year’s most-read article in Cognition and Instruction, will be available to view for free through the end of the year.

Registration is now open for non-credit programming offered through the new Office of Continuing and Professional Education (CAPE). CAPE brings together members of the community with talented professionals on our main campus and at El Centro to participate in non-credit seminars and workshops. The duration of each seminar and workshop varies, depending on topics covered.

Check out this new video from the Career Development Center! Featuring alums Miguel Loeza, Siddhee Kasudia and Sean Smith, the video tells the stories of students who took on the challenge of underemployment of college graduates following the recession and who practice good career management. They sought out happenstance and serendipity to carve out a future. The video is the result of collaboration between Communication, Media and Theatre grad student Carrie Reffitt, Accounting alum Justin To and the Media Services office. 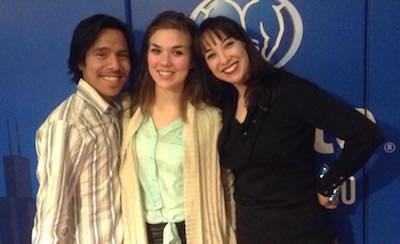 Northeastern's resident Chicago Clarinet Ensemble performed Feb. 16 on WGN Radio’s “Pretty Late With Patti Vasquez,” and the host described virtually growing up on the main campus when her mother attended school there. Clarinet students Miguel Hernandez and Elizabeth Kostencki (pictured above with Vasquez), who met at Northeastern and now are engaged, then told their love story for the Valentine’s Day-themed show. Awwww! You can watch the ensemble perform March 9 in the Recital Hall on the main campus. 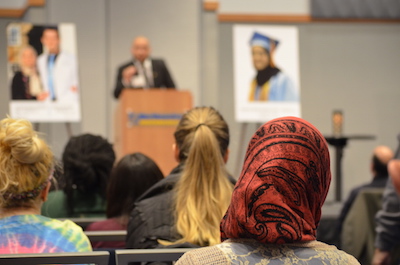 People’s World covered Northeastern’s Feb. 17 memorial for three Muslim students who were killed last week in North Carolina. "Yusor, Razan and Deah were college students working for their degrees just like you and I,” Social Work major Amani Abutaleb was quoted as saying. “They are remembered for their community service, selflessness, kind interactions with family and friends, and their short-lived marriage.” 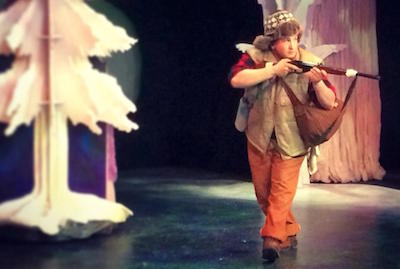 Stage Center Theatre debuted its latest production, “Gregor and the Squonk,” on Feb. 19. The play is a modern fairytale with a bit of a twist. It tells a story of Margaret Courtepy and her undying desire for beauty, which has led her to an obsession with plastic surgery. Meanwhile, husband Gregor Courtepy is in search of a mystical squonk, who has the ability to grant eternal beauty.

Northeastern will host an Education Job Fair on Tuesday, Feb. 24. The free event, which will draw more than 50 school districts from eight states, is scheduled from 10 a.m.-3 p.m. in Alumni Hall. The job fair is also open to the public. Attendees are required to bring a resume to enter and are encouraged to dress professionally.

The Association for Operations Management will host its annual Women in Operations Management Panel Discussion on Tuesday, Feb. 24, at Northeastern. The panel, moderated by Kraft Foods Senior Manager Nancy Villani, will consist of a diverse group of women who are all successful operations professionals.

Follow Stage Center Theatre on Facebook and Twitter to get a sneak peek behind the curtain. You'll be the first to see photos and videos from rehearsal, and get all the details about upcoming productions. You'll also be the first to receive announcements about auditions and future seasons.