Noteworthy at Northeastern: Another special student

Like we said last week, Northeastern Illinois University is filled with so many inspirational stories. This week, we highlight a Finance major who wants to use his education to help lift his family and his community. Read about Steve Deeloo and much more in this week’s edition of Noteworthy at Northeastern.

Business for the people

Money is important to Steve Deeloo (pictured above). Really important. It’s a value Deeloo developed growing up with his family in Iraq with little to get by—and then living for nine years together as refugees in Jordan. For Deeloo, money isn’t about being rich—it’s about freedom and survival. Now on the verge of becoming the first member of his family to earn a college degree, Deeloo is proud of what his education can do for his family and his community. Read about Deeloo’s journey as he moves closer to earning his Bachelor of Science in Finance from Northeastern later this year.

The 46th Annual Chuck Kane Scholarship Golf Event raised $20,165 on June 18. Legendary Chicago Cubs catcher Randy Hundley attended the event as the featured speaker—along with his friend and Northeastern alumnus John St. Augustine (B.A. ’92 University Without Walls). With an endowment of $444,723, the scholarship has provided support for more than 150 students. Fourteen more scholarships will be awarded before the end of this year. View photos from this year’s event.

The first class of students have graduated from the Metropolitan Peace Academy, a violence prevention training program that was featured by Block Club Chicago. Curriculum for the academy was developed by Northeastern Master of Social Work Director Troy Harden. “The attempt here is to professionalize the field of community outreach because it is among the toughest jobs in the city and yet there is no formalized training using the best available sciences and practices from across the country,” he told Block Club.

“What’s happening?” That’s a question Hannah Bonifacius often hears from the students in her classes at World Relief Chicago, a refugee and immigrant resettlement nonprofit. Bonifacius, a Northeastern student in the Teaching English to Speakers of Other Languages master’s program, spoke with NPR about the fear among immigrant communities in the current political climate. “Our current climate is affecting their mental health, for sure,” she told NPR.

Joanna Radwańska-Williams will deliver a lecture titled “‘Recollected in Tranquility’: Poetry as Intercultural Response” at 6 p.m. July 12 in Fine Arts room 203. Radwańska-Williams serves as English Adviser to the Board of Management of Macao Polytechnic Institute, supervises the Fulbright English Teaching Assistants Program, and coaches the English Debating Team. She is also the General Editor of the journal Intercultural Communication Studies. The lecture will examine Dr. Radwańska-Williams’ creative process through a reading and analysis of several original poems, written either in English or simultaneously in Polish and English. 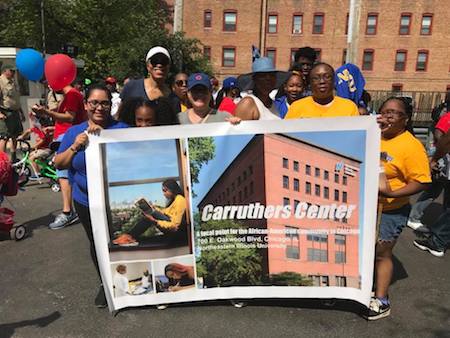 The Jacob H. Carruthers Center for Inner City Studies was well represented at the 4th on 53rd Independence Day Parade in Hyde Park. Follow along on Facebook for more photos, events and news from the Bronzeville location!