You can forgive Kevin Kucbor if he indulges in some extra holiday snacking this year. After all, the Northeastern Illinois University junior recently returned from the World Karate Federation Championship for Persons with Disabilities in Bremen, Germany.

Kucbor, one of only three Americans in the tournament, placed fifth out of 20 in his division for individuals with learning disabilities.

“I thought I did very, very well,” said Kucbor, a Special Education major who was born with a mild form of cerebral palsy. “My coaches thought I did well. For me, it wasn’t about the medals. It was more about going out there and competing on an international stage and getting the experience.”

Kucbor, who trains at North Shore Dojo in Glenview, began his karate training in kindergarten as an outlet to stay fit and active. While he intends to fight in a national tournament next year, Kucbor doesn’t plan to return to the international stage for several more years.

Rather, he is more interested in developing as a coach for athletes with disabilities, and he uses his university as an inspiration.

“My goal as a teacher in the future is to follow Northeastern’s philosophy: Making a difference in the community,” Kucbor said.

“Kevin is an engaging young man,” Korbakes said. “He is likable, hard-working and has a genuine passion for the subject matter.”

For Kucbor, much of what he wants to achieve outside the dojo still ties in to karate. He became inspired to pursue special education by his coach, who asked Kucbor to be a mentor in his program for people with disabilities.

“As soon as I started working with those kids, I fell in love with it,” Kucbor said. “I couldn’t see myself doing anything else. Coming back from the world championships and doing as well as I have, I think I continue to serve as a positive role model for those kids. It’s awesome knowing I can make a difference and make an impact in a positive way.” 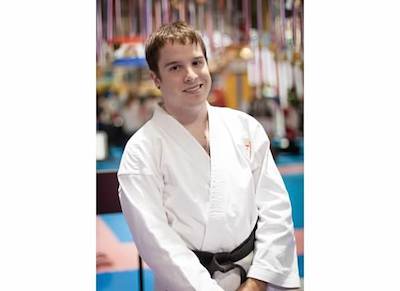