Northeastern Illinois University Professor Emerita of Linguistics Shahrzad Mahootian has published “Bilingualism,” (Routledge) a book that addresses what it means to be bilingual, how people become bilingual, and how learning multiple languages can impact children’s cognitive development.

“We live in a world where more than half the population is bilingual, and in a nation where 350-plus languages are spoken and approximately one out of five people over the age of 5 is bilingual,” Mahootian said. “Yet, in the U.S., appreciation for bilingualism and cultural diversity are too often met with fear and hostility, whether speakers are using a variety of English not considered the ‘standard,’ or are heard using a language other than English, or are merely speaking with an accent. Too often they are seen and treated as the ‘Other.’”

Mahootian, who also co-authored the textbook “Language and Human Behavior: An Introduction to Topics in Linguistics,” believes that bilingualism isn’t just about speaking more than one language or dialect, but that languages and dialects connect us to cultures, giving us multiple ways to experience the world and to express ourselves. Languages are “gifts to be proud of.” She especially feels that children can benefit greatly from bilingualism and bilingual education.

“Overall, research has found that bilingualism can be associated with a number of cognitive benefits,” Mahootian said. “For example, bilinguals are better able to minimize distractions and stay on task. For older adults, research also strongly suggests that bilingual brains can stave off language loss due to Alzheimer’s for three years longer than monolingual brains. The most important benefit though, in my opinion, is that keeping the home language alive and thriving helps to keep families better connected to one another and to their heritage and produces socially healthier adults. Promoting bilingualism means promoting stronger, more integrated individuals and communities.”

Mahootian stated that old narratives about bilingual children becoming stutterers or semi-linguals, or having developmental or cognitive learning disabilities rose from a lack of research. Some of those notions are directly linked to anti-immigration biases, similar to the biases that propagated the false notion that African-American dialects are “ungrammatical,” she said.

Mahootian, who came to the U.S. at the age of 7 without knowing any English, encourages families and educators to be patient with non-English speakers and allow them to embrace their native languages and dialects instead of shaming or denying a vital part of their identity.

“Denying children literacy opportunities in their home language is like denying or at least not recognizing a part of the child’s heritage and, subsequently, part of who they are,” Mahootian said. “In cases where bilingual education is not an option, it’s important for teachers to understand that it may take a bilingual child or a child coming in with a language or dialect other than the ‘standard’ variety of English a little time to adjust to an all-English instruction classroom, but these children are no less capable than their peers and adjust quickly. A little patience in the beginning will bring out the best in the child in the long term.”

Mahootian hopes her book will help readers see bilingualism as a norm, rather than the exception. She also encourages everyone to explore linguistics and other languages in and out of classrooms.

“I hope students will be encouraged to take at least one linguistics course during their undergraduate studies to help them develop a deeper understanding of the important role language has in our lives,” Mahootian said. “For those who are lucky enough to be bilingual, I hope they will upkeep their languages and proudly pass them on to the next generations. I also hope mono- and bilinguals will see learning another language as an opportunity to help themselves and their children be part of a larger world.” 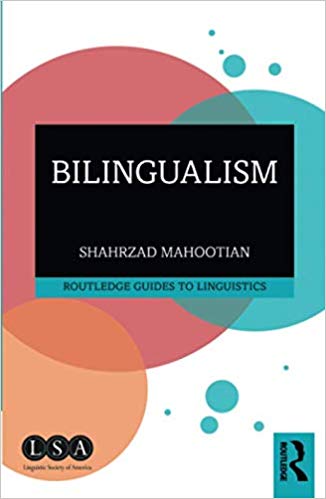