When English Instructor Larry O. Dean’s band, The Injured Parties, dropped a new album in September, the achievement was made all the more special by a collaboration with a student from Northeastern Illinois University’s Graphic Design program. The cover for the band’s second record, “Product Placement,” was designed by senior Carlos Bernabe.

“I love to bring other people into the fold if I can to bring someone into another aspect of what I do because I don’t just teach, I’m also a working musician,” said Dean, who collaborated on a record with Northeastern’s Department of Music before he started teaching at the University 10 years ago. “I would rather work with students than just the ‘go-to person’ for graphic that handles bands.”

The album, released on Zenith Beast Records, features “power pop” songs that Dean likens to groups such as They Might Be Giants and Sloan.

Bernabe, a first-generation college student, loved the challenge of taking on this project for the band, whose last cover was completed by professional illustrator Lloyd Dangle.

“I have worked on a few album covers for a friend who likes to produce music,” said Bernabe, who is on track to become one of the first students to graduate from Northeastern with a Bachelor of Fine Arts in Graphic Design later this year. “For this one, I wasn’t sure if it was going to be an internet-only release, like iTunes or something like that. Once I got into it, it was a full-on CD album cover, including the case and media for the internet. It was a bigger, more complex project.”

Dean gave Bernabe a couple of photos he’d taken, some text, and a photo of the band that he wanted incorporated into the design, then let Bernabe bring it to life.

“I had an idea of what I wanted,” Dean said. “I know a little about design, but I’m not comfortable doing it myself. I was able to talk to Carlos about it and I think he did a great job.  Carlos smartly suggested centering the smiley-ball on the CD face, so it echoes the image underneath, and also by my reckoning provides another level of meta-commentary on the whole endeavor of product placement.”

Bernabe was introduced to Dean through Associate Professor of Art Vida Sačić.

“Carlos is a talented, advanced Graphic Design student whose work is particularly well-suited to the music and lifestyle industries,” Sačić said. “He is equal parts an illustrator and a typographer, someone that I thought would resonate with this assignment. I was happy to see him take to the project eagerly.”

Bernabe came to Northeastern from Farragut High School intending to be a Physics major. As he started taking elective credits in Art, his passion for graphic design continued to grow.

“As a graphic designer, I have to be really versatile,” Bernabe said. “You have to be able to work on everything from HTML coding to printing. I’m really interested in typography and creating things like album covers, and projects where I can incorporate illustration.”

Bernabe already has an online portfolio showcasing some of his work and hopes to start working in his field as quickly as possible. He’s also looking forward to the Graphic Design student exhibit at the end of the term. Sačić hopes that more collaborations can happen throughout the University.

“I have always incorporated collaborative assignments in design classes,” Sačić said. “This semester, my students are collaborating with the Office of International Programs and the Business and Innovation Growth Center, as well as the Student Pantry on campus. All faculty who have joined the Graphic Design program understand how necessary it is for design students to build their collaborative skills and work with other folks in a variety of areas. I am thrilled to hear that the collaboration went smoothly and that both the designer and the client are pleased with the results.”

Dean hopes this can be the first of many collaborations with the Graphic Design program.

“As much as I can foster these connections now that I’ve met Vida, I’d like to,” Dean said. “Hopefully she can be someone I can go to with other projects for possibly the Creative Writing minor, another project that needs graphics, or other ways to tie the University together. I hope these projects can be beneficial to the students too, so they can use it for their resume or include it in their portfolio and maybe open doors for them to get more work."

Below: An image of The Injured Parties album art for "Product Placement" with a photo by Larry O. Dean and design by Carlos Bernabe. 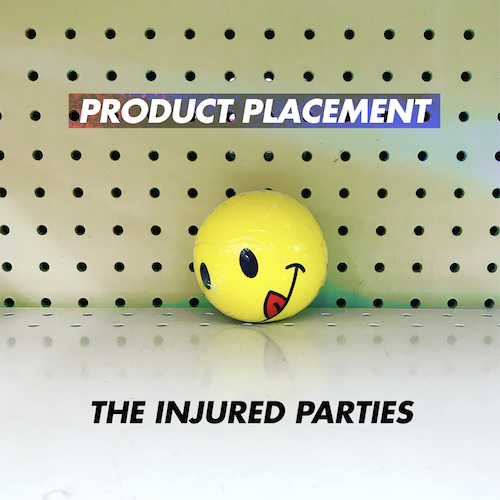