Northeastern Illinois University has selected Social Work and Inner City Studies major Ashlei Ross as its 2018 Lincoln Academy Student Laureate. Every fall semester, the Lincoln Academy of Illinois honors one graduating senior from each university in the state who demonstrates leadership and service contributions on campus and beyond, academic success, and extracurricular achievements.

Ross and other student laureates from around the state will be recognized during a Nov. 17 ceremony and luncheon at the Old State Capitol State Historic Site in Springfield, and will be awarded the Lincoln Academy Student Laureate Medallion, a certificate of achievement, and a monetary grant.

“Since being at NEIU I have flourished and that is due to my great mentors, who gave me the reassurance and encouragement that I am capable and a great person,” Ross said. “They did not focus on my failures in life prior to coming to NEIU, but say the strengths I had already gave me that push to go forward.”

Ross has demonstrated excellence through her academic achievements as a member of the University Honors Program, serving her second term as Student Government Association president, and as an accomplished leader in several service organizations and University clubs.

“Being selected as the student laureate is still unreal to me. I was honestly shocked, but very thankful to all who nominated me—Vice President for Student Affairs Daniel López, Professor of English Tim Barnett, Associate Professor of Sociology Olivia Perlow, Professor of Educational Inquiry and Curriculum Studies Lance Williams, and Director of Student Transition Services Felicia Keelen— and those on the committee to select me,” said Ross, who, outside of Northeastern works to mentor teen mothers. “I thank my children because they are my motivation to continue to strive higher every day, for the sacrifices that they have to make with me along the way.”

A self-described bookworm, Ross already had in her the tools and desire to learn, but found at Northeastern the support she needed to succeed.

“Ashlei and I have collaborated on a number of activities, including NEIU's Day of Reflection on Mass Incarceration, which Ashlei is turning into an annual event that serves the University and the city of Chicago as a whole,” Barnett said. “She is intense, driven and inspirational, and it's been exciting to work alongside her. All of her work reminds me how much is possible when smart, dedicated people put their minds to doing good work for the sake of the community and not just for their own advancement.” 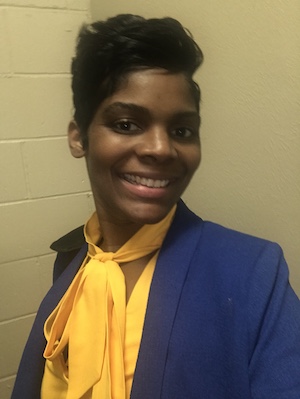