In September 1980, less than two years after Iran’s Islamic Revolution, Iraq invaded Iran and began a war that lasted for nearly a decade. There were more than a million casualties between the two sides, including thousands of civilians. Yet, the war hasn’t received much academic attention, and the role of women in the war hasn’t been discussed until now.

Associate Professor of History and Principal of the Mossadegh Initiative Mateo Farzaneh discusses these topics in his second book, “Iranian Women and Gender in the Iran-Iraq War” (Syracuse University Press).

“The war narrative has always been masculine in which men sacrifice and die, and are memorialized for their contribution,” Farzaneh said. “Discussing war in the masculine is a global phenomenon with exceptions where women are mentioned for their participation as nurses or as ‘comfort women’ in the case of the Japanese. Most often women are not discussed as grandly as men are and are mostly discussed in Western societies. Oftentimes the media depicts Muslim women, including Iranian women—especially since 1979—as subservient, meek and powerless, which could not be further from the truth.”

Farzaneh, who was born in Iran, volunteered with the International Federation of Red Cross and Red Crescent Societies from 1982 to 1984, collecting public donations and aiding a large number of injured people who needed medical treatment due to the ongoing violence. During that time, he witnessed the direct and indirect impact women had in the war.

“I knew that many women took part in the war as volunteers in various capacities,” Farzaneh said. “From doctors, surgeons and nurses, to women who sent their men to war, to those who donated their material life possessions, I felt they were all war participants and thus must be studied from that angle, which is what I’ve done in this book.”

Farzaneh noted that one of the most interesting facts he discovered while conducting research for this book was the status and beliefs of the women who largely participated in the war.

“Underrepresented, undereducated women from highly conservative and less fortunate socioeconomic backgrounds had overwhelming patriotic feelings, Farzaneh said. “Although secular and Western-influenced women participated in some capacities, the overwhelming majority of women who participated in the war came from the former.”

Farzaneh, who’s been teaching at Northeastern since 2010, said he hopes to be able to use his book in some of his courses to provide context to the role of women in war during this point in history.

“Because the book uses true stories to contextualize women’s activities during the war, I think students will find it useful to understand history from a realistic point of view and not just academic jargon that might not be so readily accessible to them,” Farzaneh said.

Farzaneh hopes his book will provide a window into this less-studied part of history and shine a light on the often hidden role women have played in this conflict. He also encourages readers to reach out to him with questions and feedback about his research.

“I hope readers of my book begin thinking of Iranian women as active participants in social movements and national crises and not simply as observers far in the background,” Farzaneh said. “I also hope people don’t categorize women based on their ethnicity, level of education, nationality, ideology or class distinction. The history of women is as diverse as they are, and ignoring some in favor of others that we might see eye-to-eye with is a dangerous practice that leaves us with a lopsided view of women’s accomplishments and challenges.” 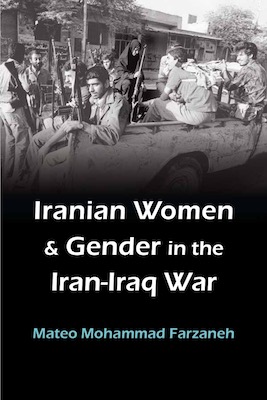